“It was no joke tracking down something as big as a house that one could not see, but that had all the vicious malevolence of a daemon.”
–H.P. Lovecraft, The Dunwich Horror

Your machete won’t help you. Nor will your shotgun. Exploding dynamite won’t even make a dent… 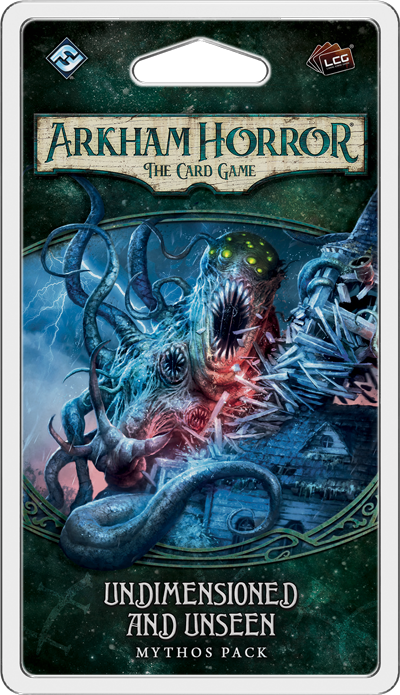 Undimensioned and Unseen, the fourth Mythos Pack in The Dunwich Legacy for Arkham Horror: The Card Game, is now available at retailers—and it has unleashed a brood of horrifying abominations upon the countryside that must be destroyed.

Not only must these abominations be annihilated, but it has fallen to you to do so. The citizens of Dunwich will offer you little aid; they are too deep in their panic. They can think of no better response to the unseen creatures that can smash houses as though they were made of paper than to run screaming, praying for safety. The question is: Can you do any better?

Every scenario in Arkham Horror: The Card Game is a new adventure, steering you in new directions, leading you to new discoveries, and challenging you to survive a terrifying new array of enemies and events. This is the case in the Core Set, as its adventures lead you swiftly out of a ghoul-infested house and into a web of conspiracy spurred by forces far darker and more malevolent than you might have first guessed.

It is also the case in The Dunwich Legacy. As its Mythos Packs have peeled back layer after layer of mystery, they have also introduced a series of new mechanics, taking advantage of the game’s flexible network of act and agenda decks, encounter deck, and locations.

Now Undimensioned and Unseen hits you with yet another new challenge, throwing you into the thick of a physical confrontation with invisible monsters that are wholly impervious to all standard arms and ordnance.

It’s a scenario sure to please fans of the Lovecraft mythos. Here, our shotguns are rendered meaningless in the face of enemies that defy human comprehension. Pistols are wholly ineffective. Dynamite is useless. Machetes won’t make a scratch. Your only hope for survival lies in your ability to broaden your understanding of the universe.

Your whole goal in Undimensioned and Unseen is to find the creatures’ vulnerabilities and exploit them. If you don’t, then you’ll assuredly be driven mad or devoured.

If, however, you are able to decipher the strange, Esoteric Formula (Undimensioned and Unseen, 254) that contains the secrets to these creatures’ creation—and the means by which they can be destroyed—you have a fighting chance.

It’s that knowledge that can help drive you forward, past the despair, through the madness, and toward the next layer of the mysteries before you. “If it bleeds…” (Undimensioned and Unseen, 225) it can be destroyed. But the more keen-eyed among you may have already noted, your chances improve if you stick together.

When you play “If it bleeds…” after destroying a Monster, it’s not just you who recovers horror equal to the monster’s horror value, but every investigator at the same location. Accordingly, you’ll find it particularly helpful to stick together throughout Undimensioned and Unseen, especially once you realize how truly difficult it may be to harm the creatures, even with the Esoteric Formula in hand.

Sticking together allows you to contribute icons to your teammates’ skill tests, and this may make it easier to use the Esoteric Formula to take advantage of the creatures’ unusual weaknesses. But even if you don’t have icons to commit to your teammates’ skill tests, your Seeker might still play Expose Weakness (Undimensioned and Unseen, 228) to reduce the difficulty of bashing a monster bloody.

How Will You Respond?

How will you respond to the challenges before you? Unseen creatures wreak havoc across the countryside, leaving Ruin and Destruction (Undimensioned and Unseen, 257) in their wake. Working closely with your teammates, you may be able to expose and exploit their weaknesses, but you’ll also be leaving yourselves vulnerable to the Massive abominations and their attacks.

Will you panic? Or will you hold fast to your belief that some strange, obtuse parchment may save you when guns, blades, and explosives will not? Is this very belief not a madness of its own? Must you now embrace this madness to defeat another, greater madness? 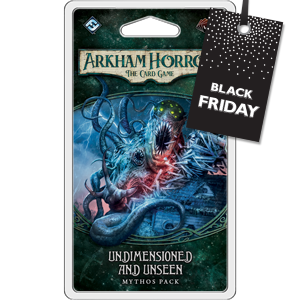