Trolls and ogres are two of the largest and most belligerent monsters in Terrinoth. Only their age-old hatred for each other has safeguarded the innocent from their depredations. Now, this ancient war has been supplanted by a budding alliance. In Visions of Dawn, you can lead an army of ogres and trolls to rampage across the land, or you can be one of the noble few to stand in their way. 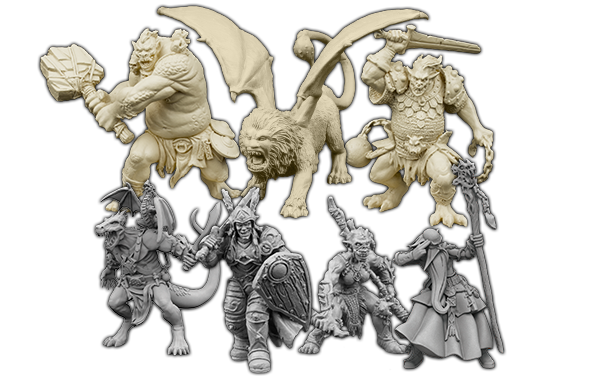 Visions of Dawn offers ten plastic figures previously only available through the first edition of Descent. You may take up arms with four heroes of the realm: Master Thorn, Nara the Fang, Ispher, and Sir Valadir. You may play as the overlord, commanding a monstrous legion composed of ogres, trolls, and manticores. To expand your experience as hero or overlord, this Hero and Monster Collection offers two brand new quests, Trucebreaker and Visions of Dawn, each challenging you to quest and battle for the future of the realm.

One hero to join your battle in this expansion is Ispher. Screams of terror are nothing unique for him: they follow him to each new town and village. He has been mistaken for a bandit, a monster, and most memorably, the incarnation of a spirit that ate disobedient children. Often attacked or turned away, only the wise find a brilliant healer with a caustic sense of humor. No stranger to irony, Ispher has commonly saved those who mocked him just an hour earlier. Now, Ispher has but one goal: to use his arts to destroy the true, unbridled cruelty of the overlord.

Ispher’s healing arts are unparalleled, even among other Healers. Many Healers are forced to take time away from healing the party to tend their own wounds, but Ispher avoids this delay with his natural regenerative properties. Ispher’s hero ability keeps him from ever becoming poisoned, and it also allows him to recover two damage at the start of his turn. With this constant healing to rely on, Ispher has plenty of time to keep the rest of the party hale. 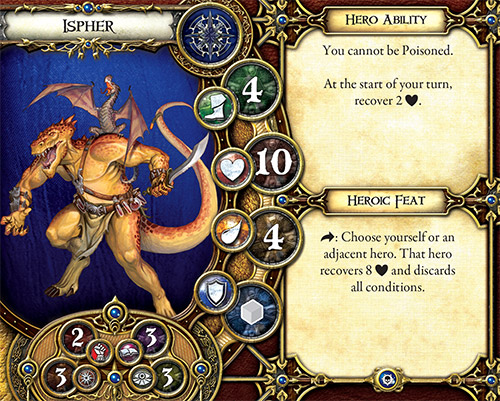 Ispher also features a powerful heroic feat that can turn the tide of battle in an instant. Once per encounter, Ispher may use an action to choose himself or an adjacent hero. The chosen hero immediately recovers eight damage and removes all conditions! This sudden surge of health allows any hero to work towards his objectives, instead of wasting crucial actions healing. Combined with his hero ability, Ispher’s heroic feat invites you to recover an unprecedented amount of damage every turn, keeping every hero ready for action.

The heroes will need every bit of healing they can muster when facing monsters as terrifying as the ogres. Always eager for their next crime, ogres tend to carve out territory near small villages or deserted roads, where they can isolate potential prey. Once an ogre has cornered its victim, only a mighty warrior can hold out long against the ogre’s staggering blows. Even those who survive rarely do so in one piece.

In battle, an ogre is a fearsome opponent, easily rending a hero limb from limb. Ogres can spend a surge to deal additional damage, and they can also use surges to trigger the Knockback ability. Knockback allows an ogre to cast a hero up to three spaces, potentially throwing him into hazardous terrain or separating him from his comrades. When ogres prowl the darkness, a hero alone is often as good as dead. 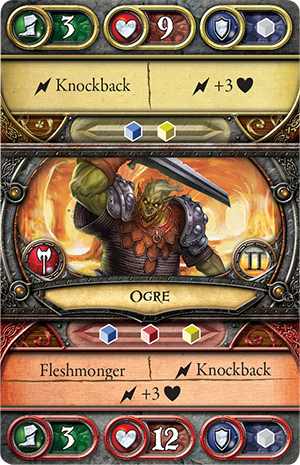 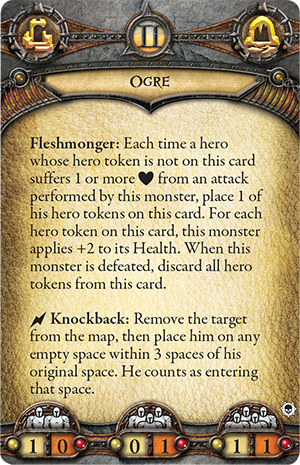 Heroes like Ispher are not the only creatures that can practice healing in Visions of Dawn. Master ogres take vitality from the blood of heroes, as evidenced by the Fleshmonger ability. The first time an ogre deals damage to a hero, you may take one of his hero tokens and place it on the ogre’s Monster card. For each hero token on its card, the master ogre gains two additional health, allowing it to swell its already formidable health by attacking numerous heroes. These abilities make ogres dangerous on their own, but when they fight side-by-side with trolls, all of Terrinoth may tremble.