Become the leader of an imp family that has just started a new business – breeding and selling petz. Sound simple and safe? Well, we forgot to mention that those petz are for Dungeon Lords.

This means magical, playful, sometimes angry monsters that constantly desire attention and at the very moment you want them to demonstrate their qualities to buyers they are sick or they poop. Sometimes you are even glad that you got rid of them – but the profit is unbelievable.

In Dungeon Petz, you run a pet shop for dungeon lords. You start with your family of imps, some gold, and one dirty old cage. The game consists of five or six rounds. In each round, you send your family members out to buy baby pets, cages for pets, food for pets, etc. Those imps who are not out shopping are busy caring for the pets, entertaining them, cleaning their cages, and watching them grow. Beginning with the second round, your pets will participate in local pet shows. The prizes you win will boost your reputation.

In the third round, the local dungeon lords begin arriving, looking for pets. The more closely you match their tastes, the better your reputation will be. Exhibitions and customers are revealed in advance, so you can plan for them – either by purchasing a suitable pet or by working to get the most from the pets you already have.

However, these pets are living creatures. When they do something unpredictable, you will have to improvise. At the end of the game, you get extra reputation for your economic success and your shop’s appearance. The player with the most reputation points wins.

Dungeon Petz is a standalone game set in the Dungeon Lords universe. The game consists of several rounds in which players use unusual worker placement mechanisms (players simultaneously prepare different sized groups of imps in order to play sooner than others) to prepare themselves for the uneasy task of raising creature cubs and pleasing their different needs (represented by cards) in order to sell them as grown and scary creatures to Dungeon Lords.

In the meantime, they also attend various contests in which they show off their pets, scoring additional points. 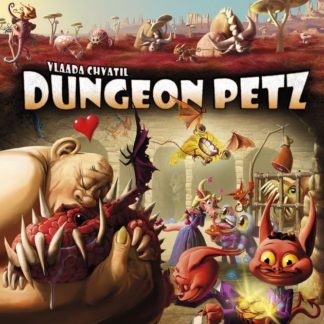