Dungeons & Dragons: The Legend of Drizzt

A cooperative game of adventure for 1-5 players set in the world of Dungeons & Dragons.

Dungeons & Dragons: The Legend of Drizzt is part of a series of dungeon crawl board games set in the Dungeons & Dragons world published by Wizards of the Coast. The other games currently in the series are Castle Ravenloft and Wrath of Ashardalon.

It is named after the book series by the same name recounting the adventures of the dark elf Drizzt Do’Urden and his friends.

Designed for 1-5 players, this boardgame features multiple scenarios, challenging quests, and cooperative game play. Players explore the game world, which is built during the game by laying out tiles, using ready-made player characters and encountering enemies with corresponding miniatures. Encounters are generated by drawing cards and resolved using a D20 die.

All players win together, depending on the scenario, by escaping, saving others or overcoming a threat.

The adventures of Drizzt Do’Urden, as told in the New York Times best-selling Forgotten Realms novels by R.A. Salvatore, come to life in this thrilling board game. Take on the role of the legendary drow ranger or one of his famous adventuring companions, battle fearsome foes, and win treasure and glory. Designed for 1-5 players, this board game features multiple scenarios, challenging quests, and cooperative game play. The contents of this game can also be combined with other D&D Adventure System Cooperative Play board games, including Castle Ravenloft and Wrath of Ashardalon, to create an even more exciting experience. 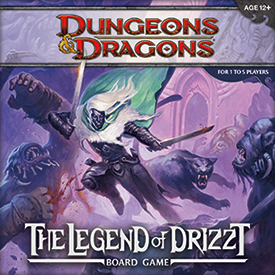