Imploding Kittens is the first Expansion of Exploding Kittens, the award-winning card game that made Kickstarter history as the most-backed project, ever.

This Expansion deck includes 20 new cards featuring 6 new types of actions and an Imploding Kitten which increases the game from 5 to 6 players.

This is an expansion only.  It requires a copy of Exploding Kittens.

As Imploding Kittens is an expansion, it takes the core mechanics of the base game and adds new twists to them to bring more strategy to the game. The eponymous new twist that this expansion brings is the Imploding Kitten card; this card replaces one of the Exploding Kittens in the deck and when it’s initially drawn it doesn’t kill off that player straight away.

This brings us to the other new twists Imploding Kittens brings to the table; the expansion includes five new card types which bring new ways to defend yourself and attack the other players. Targeted Attacks work like the Attack cards in the core game, but they allow you to pick the recipient of your wrath instead merely targeting the next player. Alter the Future cards allow to not only see what is coming up, but to also stack the top three cards to avoid getting hit with a deadly kitten.

Reverse cards change the direction of play and skip your card draw (they also trigger the cone of shame when someone forgets which direction the game is going in now). If you know that there is some kind of cat of doom heading your way at the top of the deck, you can now use the new Draw From the Bottom cards to do just that.

Last but not least is the “adorable” Feral Cat card–this card can be used as a wild card to create pairs with the other cat cards to steal cards from other players. 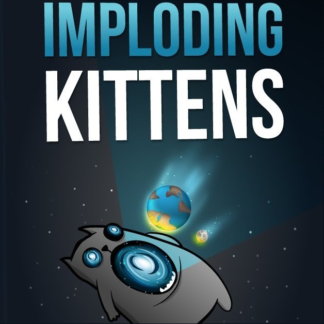