The Lord of the Rings Bundle

The Lord of the Rings Bundle 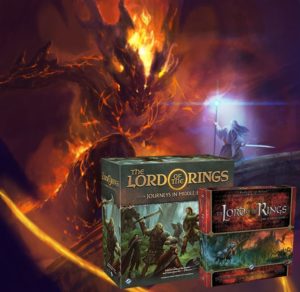 It’s a dangerous business, Frodo, going out of your door,” he used to say. “You step into the Road, and if you don’t keep your feet, there is no knowing where you might be swept off to.”
–J.R.R. Tolkien, The Fellowship of the Ring 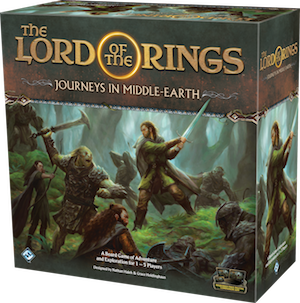 Form your Fellowship and set out on your own adventures in The Lord of the Rings: Journeys in Middle-earth, a fully-cooperative, app-supported board game set in J.R.R. Tolkien’s iconic land of Middle-earth! As the dark forces gather, players band together to unravel mysteries, make courageous choices, and fight against the evil that threatens the land.

No matter if you choose to set out on your own or venture forth with four other players, a free companion app takes control of the evil forces arrayed against you, freeing you and your companions to stand together in a single Fellowship and battle against the darkness. What’s more, the app guides you through entire campaigns, filling each adventure with content from a host of possibilities and allowing you to leave your own mark on Middle-earth. 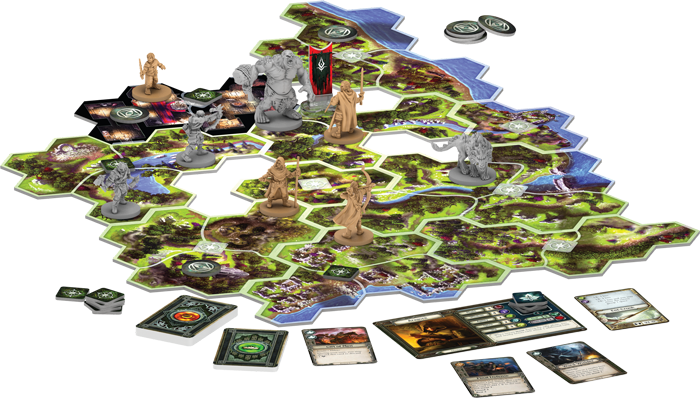 “There is naught that you can do, other than to resist, with hope or without it. But you do not stand alone.”
–Elrond, The Fellowship of the Ring

In every game of The Lord of the Rings: Journeys in Middle-earth, you and your friends become heroes of the Free Peoples of Middle-earth, preparing your skills and testing your might and wisdom in combat against the encroaching darkness. Each of the iconic characters you can choose to embody have their own special abilities to contribute to your Fellowship, giving each one a distinct identity for your campaign.

A hero like Aragorn, for example, is a born leader, helping the entire party prepare for any situation. The leader of the Dúnedain of the North and a descendant of Isildur himself, Aragorn is a Man destined for greatness. But his lineage cannot stop a foe’s blade, nor can it feed his people. To survive the trials ahead, every hero must muster all their strength and make effective use of all their abilities.

In addition to their special ability and the items they claim at the beginning of a campaign, every hero sets off on their journey with a unique deck of skill cards that they use to ward off dangers and make progress in their adventures. These cards represent a character’s accumulated knowledge from their days exploring Middle-earth, including tactics, innate abilities, and even songs they can draw on in the heat of battle. Whether you’re playing as Legolas or Beravor, however, you must carefully choose how to apply your skills.

Every skill card in Journeys in Middle-earth can serve two functions. You could prepare a skill at the end of each round, allowing you to use its ability. On the other hand, you could put cards with useful success icons on the top of your deck in preparation for future tests. Only by carefully manipulating your deck and balancing prepared skills against the need to succeed at skill tests can you hope to succeed at your quest. 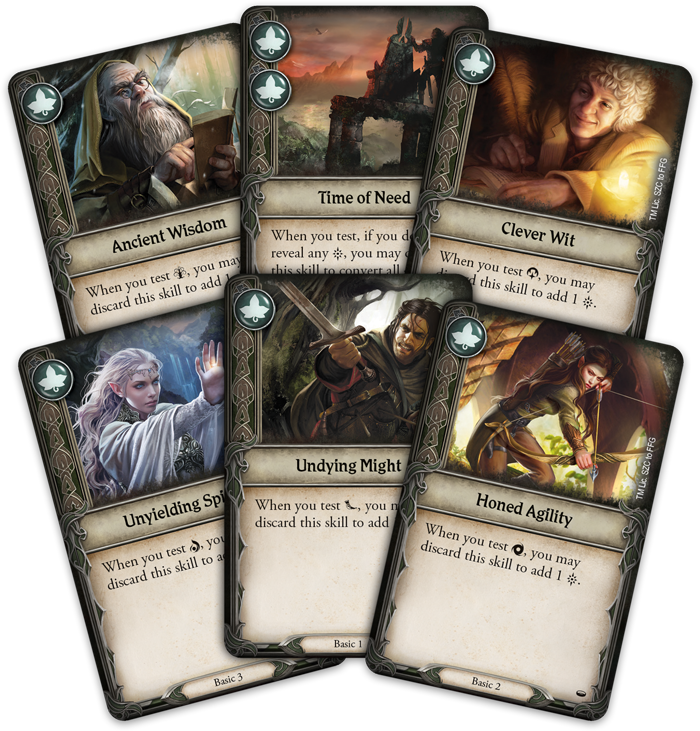 While the foundation of every hero’s skill deck is their unique set of skill cards, you still have a the freedom to choose how you approach each new adventure. Before beginning a game, every player takes on a different role in their Fellowship, adding the skill cards for that role to their deck. You might become your party’s Guardian, protecting others with your strong defenses. Or, you could become a tricky Burglar, easily evading enemies. You’re free to develop your hero’s skills throughout a campaign, even switching roles between adventure as you weave together your story with each game.

“I don’t like anything here at all,” said Frodo, “step or stone, breath or bone. Earth, air and water all seem accursed. But so our path is laid.”
–J.R.R. Tolkien, The Two Towers 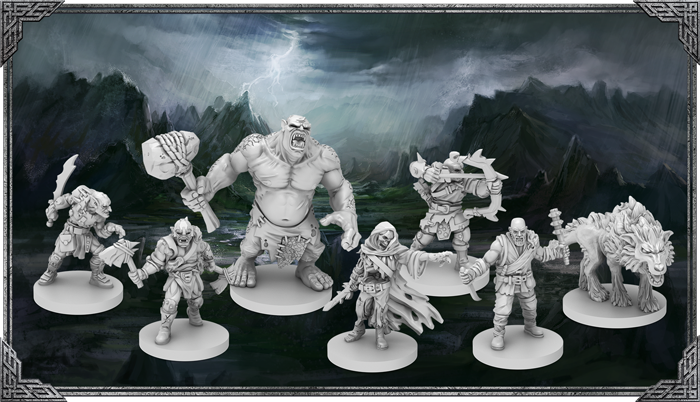 The Lord of the Rings LCG:

The Lord of the Rings: The Card Game is a cooperative adventure game in which the players attempt to complete a scenario, each with three heroes of their choice and a deck of allies, events and attachments to support them. Each round, players send their heroes and allies to quest or to fight with enemies that engage them. 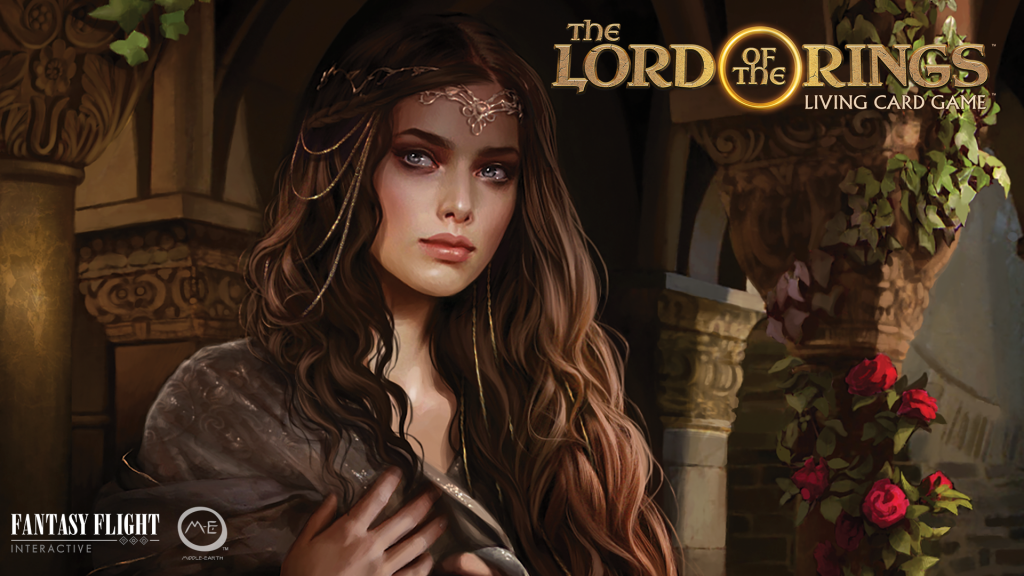 However, as the heroes and allies exhaust after questing, defending, or attacking, the players’ options are typically insufficient to deal with everything at once. 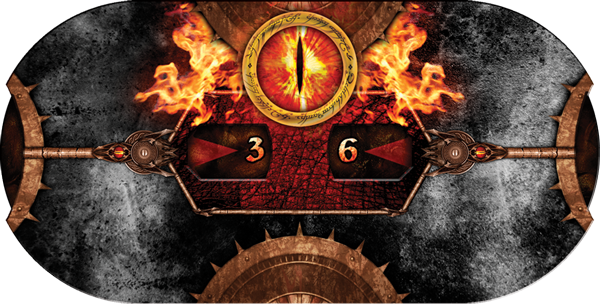 Therefore, players need to determine whether it is more urgent to quest and make progress in the scenario while the enemy forces gain power, or to take down enemies while making no progress, not knowing what will come next.

The Lord of the Rings: The Card Game is the base game of a Living Card Game for which new adventure packs are released monthly. The base game contains three scenarios, twelve famous characters from the works of J.R.R. Tolkien (including Aragorn, Legolas, Gimli, Denethor and Eowyn), and four pre-constructed player decks. 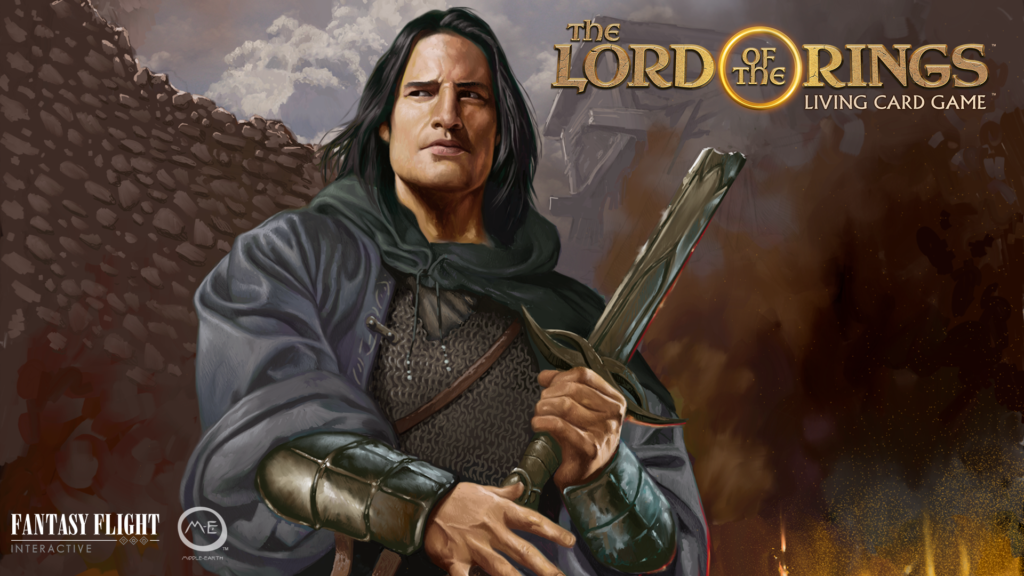 Players can either use one of these decks; or construct their own deck to increase their chances to be succesful in the more challenging scenarios. The monthly adventure packs contain a new scenario, a new hero, and new player cards to be used in their deck. The base game is for 1-2 players; but with an additional base game the scenarios can be played with up to four players. 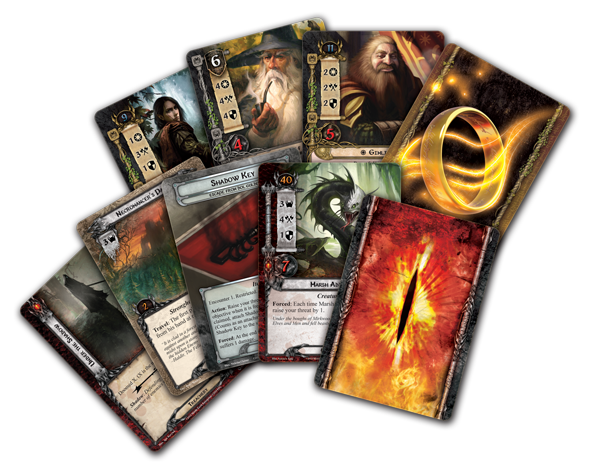 Although this game is set in Tolkien’s Middle Earth, the scenarios do not represent scenes from the books, but rather take place in the seventeen years from Bilbo’s birthday until Frodo’s departure from the Shire. 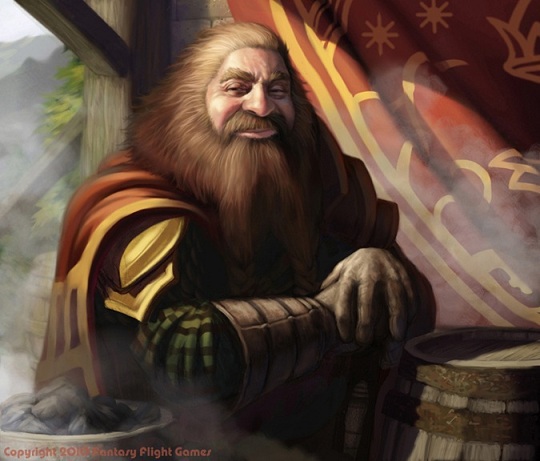 The scenarios from saga-expansions do represent scenes from the books. 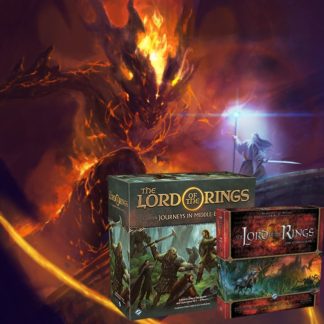