The Lord of the Rings LCG: The Battle of Lake-town

Prepare yourself for a fight to the death with the legendary dragon Smaug in The Battle of Lake-town, a scenario originally designed for a special event at Gen Con Indy 2012! In this special scenario for The Lord of the Rings: The Card Game, Middle-earth’s heroes must defeat the legendary dragon Smaug to save the citizens of Lake-town, but the odds are against them. The town is burning, Smaug’s fires leap from building to building, and as the dragon soars overheard ready to make his next attack, his hide of impenetrable scales protects him from nearly all attempts at retaliation! 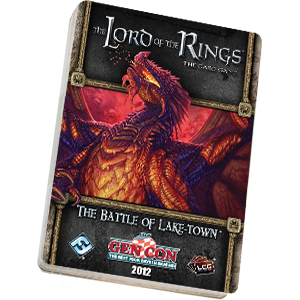