“The rage feeds my symbiote. The rage makes it strong.” – Flash Thompson 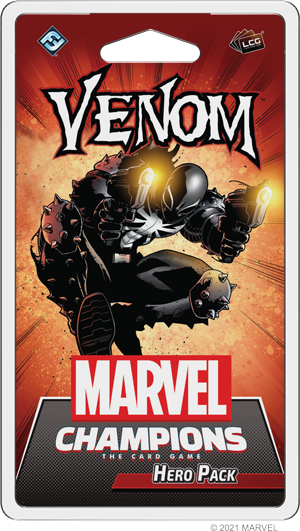 A wartime veteran and an old classmate of Peter Parker, Flash Thompson was fused with the Venom symbiote during Project Rebirth 2.0, the U.S. government’s second super-soldier program. Now, Venom travels the galaxy, using his exceptional abilities to take down the forces of evil wherever they may be.

As another member of the Guardians of the Galaxy, Venom swings into action in this expansion pack, which introduces Venom as a brand-new playable hero along with his fifteen signature cards. With a pre-built Justice deck ready to go from the moment you open the box, you’ll be able to try out Venom’s impressive arsenal right away. Rush in guns blazing and tear your way through the villain’s schemes with this high-powered hero! 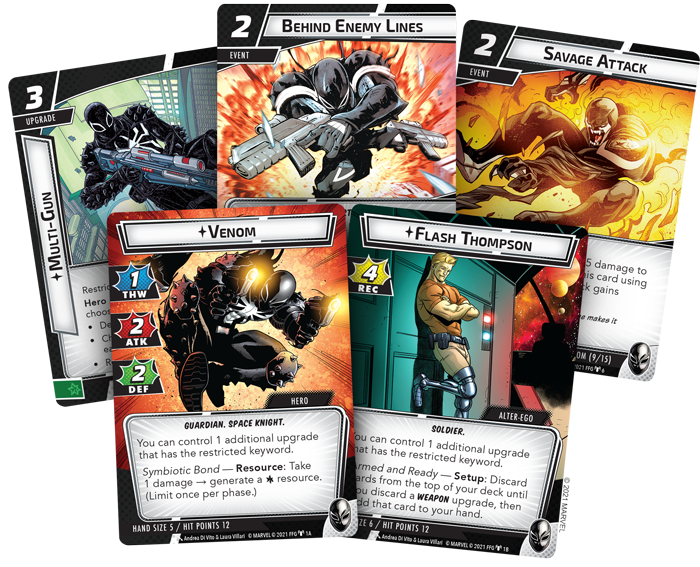 Using the unique capabilities of his symbiotic suit, Venom bursts onto the scene with a wide array of weapons at his disposal. With the ability to control an extra restricted upgrade at any given time, Venom comes to the table ready to wield a greater range of powerful tools than his peers, making him incredibly versatile. 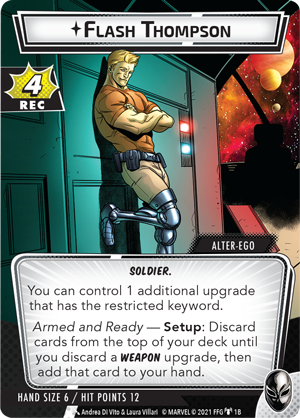 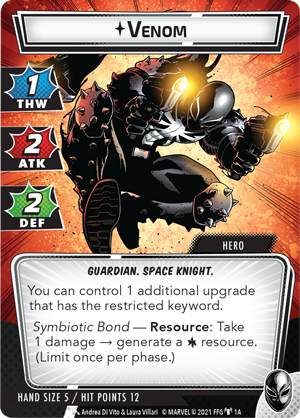 In order to make sure you have the tools you need, Flash Thompson (Venom, 1B) will search your deck for a Weapon upgrade during setup and add it to your hand. Then, as Venom (Venom, 1A), you can use your Symbiotic Bond to help you generate the resources you need to build your arsenal. Add in valuable search cards like Locked and Loaded (Venom, 4), and this means Venom can wield powerful upgrades like the Multi-Gun (Venom, 8) or his twin Venom’s Pistols (Venom, 10) right out of the gate. Once you’ve armed yourself, you can launch a mighty assault with Run and Gun (Venom, 5), allowing you to use Venom and all of his Weapon upgrades multiple times in one turn! This means that, with Multi-Gun and both Venom’s Pistols equipped, you could potentially deal 12 damage to an enemy, remove 10 threat from schemes, or deal 6 damage and remove 5 threat all at once! 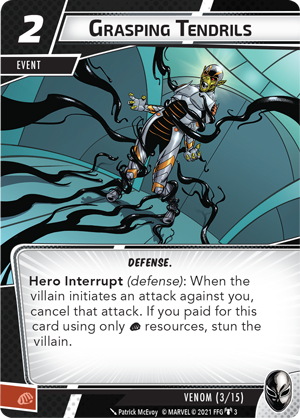 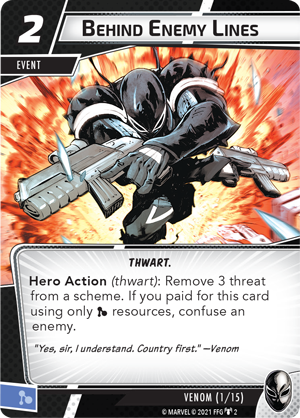 Venom’s versatility doesn’t end there, though. Being able to generate a “wild” resource each turn with Symbiotic Bond allows him to trigger the secondary effects of cards like Grasping Tendrils (Venom, 3) and Behind Enemy Lines (Venom, 2) more easily, effectively keeping the villain on lockdown. You can even pair this with Venom’s extra restricted card by using a Sonic Rifle (Venom, 15) to deal some extra damage to a confused enemy. Already have three restricted cards in play? No problem! Just equip a Side Holster (Venom, 21) so you can expand your arsenal even further.

A Struggle for Control

Venom is a powerful hero, but all that power is hard to manage. The symbiote has a mind of its own, after all, and if Flash isn’t careful, sometimes it will lash out at him in with frenzied rage.

That’s right; the nemesis for Venom is, in a sense, himself! 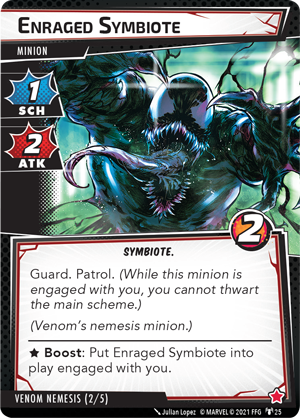 During setup, Venom’s player will place four copies of the Enraged Symbiote (Venom, 25) off to the side, just like any other hero would with their nemesis. During the game, if Venom’s controller is instructed to put their nemesis minion into play, such as through the card Shadow of the Past (Marvel Champions: The Card Game Core Set, 190), they will be forced to put all four of the Enraged Symbiotes into play engaged with Venom. This, combined with the Klyntar Frenzy side-scheme (Venom, 24), means that Flash Thompson can never take his power for granted—not when it can just as easily turn against him!

Venom’s extensive arsenal and resourcefulness make him a valuable ally to the Guardians of the Galaxy. The Guardians arrive in Marvel Champions: The Card Game with The Galaxy’s Most Wanted, and you can look forward to Venom joining their ranks when the Venom Hero Pack releases in July!