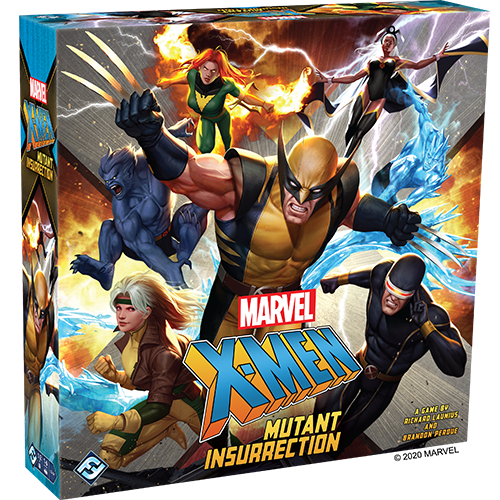 Fifty miles north of New York City, Xavier’s School for Gifted Youngsters may seem like just another affluent private school for exceptional students. Few could guess that these students are mutants, and fewer still know that Xavier’s School is the headquarters of the X-Men—a team of heroic mutants fighting to protect humanity from superhuman threats!

Designed by Richard Launius and Brandon Perdue, X-Men: Mutant Insurrection invites you to travel across the globe on death-defying missions to recruit new mutants, capture criminals, protect innocent lives, and battle against some of the most iconic X-Men villains. You’ll build a team of mutants, with characters like Rogue, Wolverine, and Storm joining forces with Shadowcat, Magik, and Forge. Eight distinct scenarios await, each with their own challenges, and each leading to a no-holds-barred showdown against villains like Magneto, Dark Phoenix, or the Hellfire Club. The Blackbird is ready to launch—join your team and fight for the future!

Whenever you start playing X-Men: Mutant Insurrection, you’ll find yourself pitted against an undeniable threat. The X-Men may learn of a secret lab using mutants as test suspects, Jean Grey may be consumed by the power of the Phoneix Force, or Magneto may declare his intentions to reshape the world under the leadership of the Brotherhood of Mutants.

Your mission begins with the plot card and the story cards that it brings into play. By following the trail of these story cards, your team can accelerate toward a showdown with the dark forces arrayed against you. For example, when you’re playing The Brotherhood of Mutants scenario, your first steps are indicated by the Xavier’s Dream story card. The briefing brought by Xavier’s Dream shows that you’ll need to complete missions around the world to advance to the next part of the scenario! But what exactly goes into taking on a mission in X-Men: Mutant Insurrection? 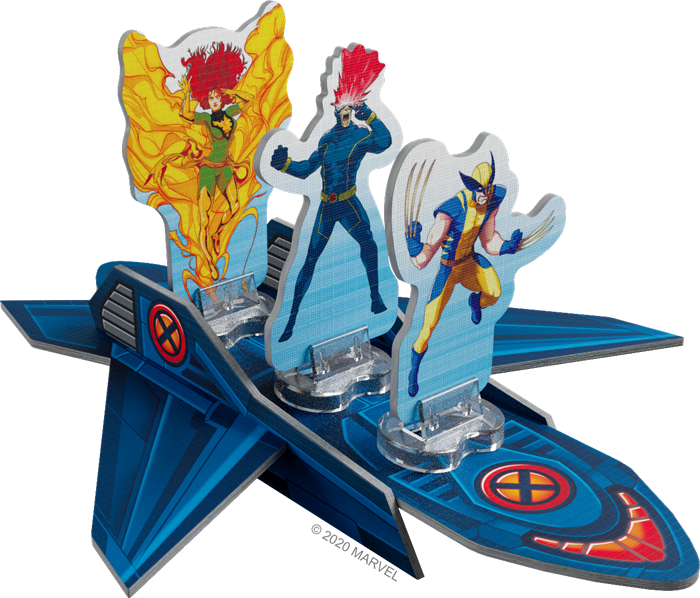 At the start of each round, you and your fellow heroes are onboard the Blackbird, ready to fly around the world and take on any mission—such as a battle with the villainous mutant, Avalanche! Every mission card features of a series of objectives, each with its own requirements of power, teamwork, and fighting ability. For example, if you’re taking on Avalanche, you’ll need to complete all three objectives (in any order) if you’re going to complete the mission!

Different missions can have very different requirements and you’ll have to carefully choose which mutants are going to tackle a mission, because each of the game’s sixteen mutants boasts their own dice and special ability. Facing down Avalanche means that you’ll have a fight on your hand, and you’ll probably be taking some damage along the way. For a scrappy mission like this, you’re going to want heroes with plenty of red dice to pump out damage, like Wolverine and Cyclops. 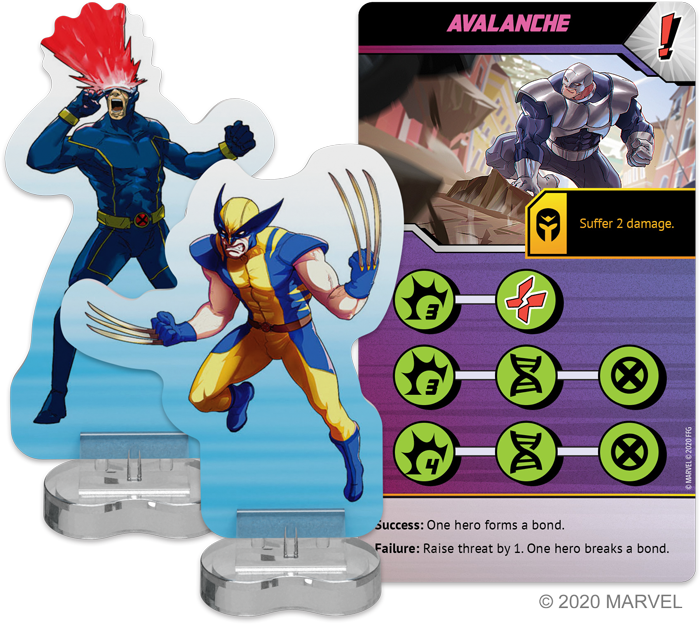 Cyclops and Wolverine deploy to the Avalanche mission, attempting to take down the villainous mutant!

After you’ve chosen which mission you’re going to take on, it’s time to roll your dice! Wolverine and Cyclops will each have a chance to defeat Avalanche, but you leap forward with Cyclops to take the first swing. Even though Wolverine isn’t leading the charge this turn, he’s still able to assist, and Cyclops can benefit from Wolverine’s assist card, gathering two red dice and two yellow dice from his own card, plus another red die and a blue die from Wolverine’s assist card.

Cyclops attempts the main mission, but he can also benefit from the dice and special ability on Wolverine’s assist card!

In order to take down Avalanche, you’ll have to complete all three of his objectives—but even if you can’t finish all three objectives in a single turn, you’ll still be able to soften him up for Wolverine. As Cyclops, you roll your pool of dice, and you have two chances to reroll any number of dice in search of the symbols that you need. You must be cautious, however—Avalanche has a special villainy effect, and if you want to reroll any dice showing that symbol, you’ll have to take two damage! 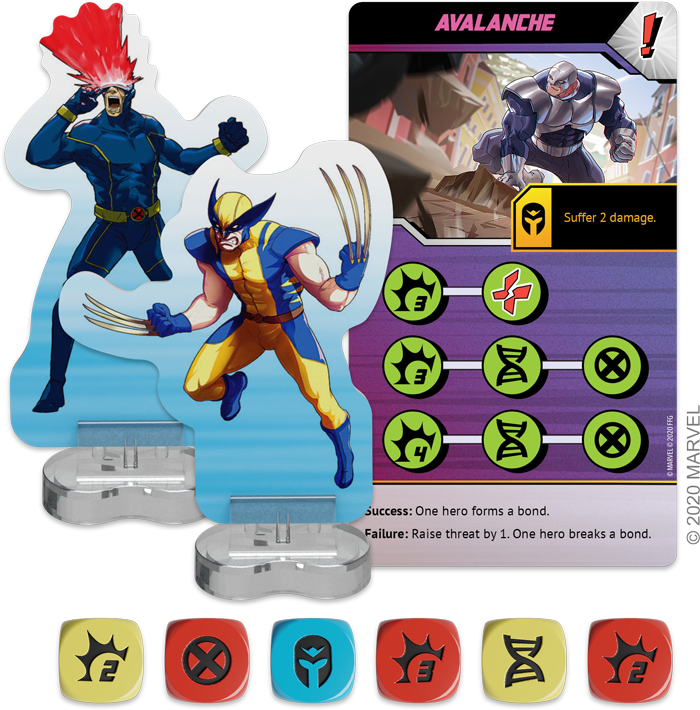 After taking two rerolls, Cyclops has the results to complete two of Avalanche’s objectives.

After taking your two re-rolls, you end up with seven fight, a power, a teamwork, and a villainy, as shown above. This is enough to complete the first and third objectives on Avalanche’s mission card, though you’ll also need to take a damage to finish the first objective. There’s only one objective left, and hopefully Wolverine can finish the job! If Wolverine finishes the mission with his dice, you’ll resolve the Success outcome, but if any objectives remain uncompleted after each of the heroes have taken their turns, the heroes must suffer the Failure outcome and return to the Blackbird.

Time for a Showdown

Of course, the X-Men have plenty of tools that they could call upon. New mutants can be found around the world, such as Rictor or Cypher, and they’re eager to help out if you take them with you on mission. Special training lets you bank up tokens that can be spent to complete objectives, and you may even have the chance to forge a powerful bond with another hero at the table, such as Love or Camaraderie —giving you each helpful abilities so long as the two bonded heroes are deployed to the same mission. 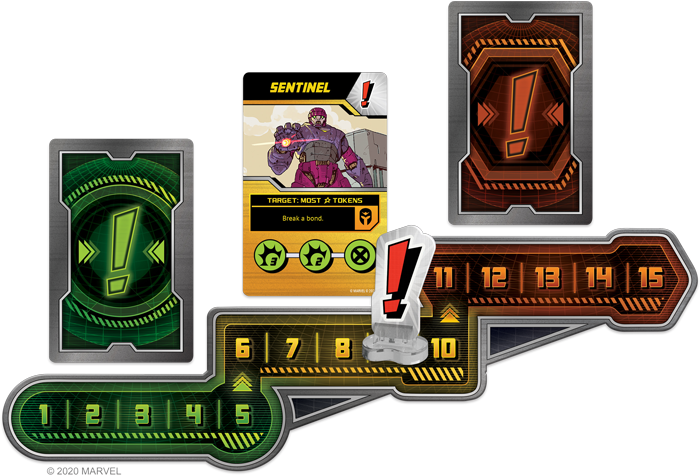 The threat track is constantly advancing, and if it reaches 15, the X-Men will lose the game!

There are evil forces arrayed against you however, and they won’t stop while the X-Men are still alive. After the mission phase each round, threat will increase, pushing the heroes towards defeat. Threat cards can lead to devastating events or dangerous Sentinels that deploy to missions and make them even more difficult to defeat. 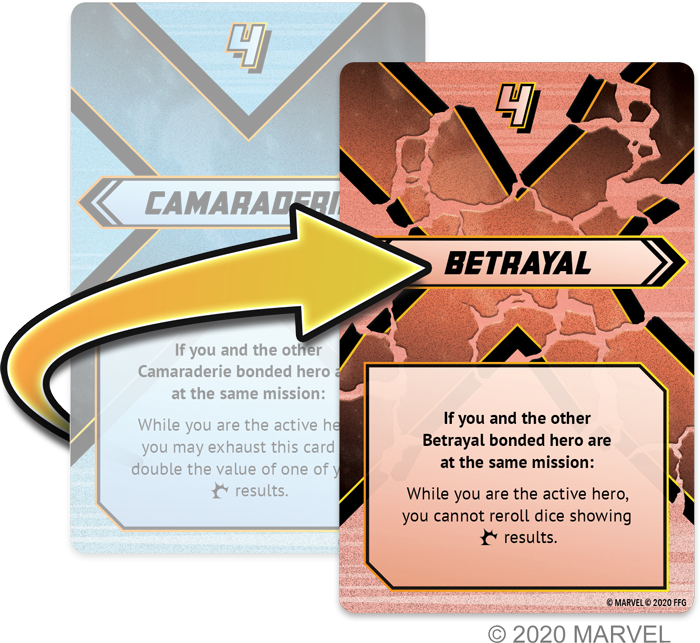 A bond like Love can be a powerful boon—but if it gives way to Regret, it could tear the team apart from the inside.

Even the bonds between heroes can become twisted or broken. Love may turn to Regret, and Camaraderie may give way to Betrayal —and you’ll have to reckon with the consequences of these negative bonds if those heroes are ever deployed to the same mission. 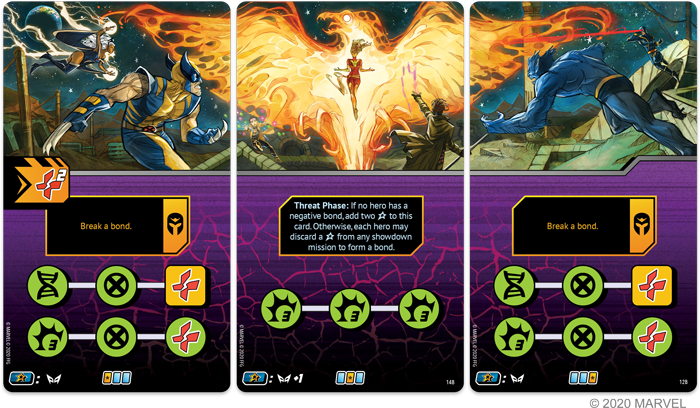 Every scenario culminates with a massive showdown against the villain!

Completing missions and advancing through the story forms the heart of gameplay in X-Men: Mutant Insurrection, but it’s always leading up to a massive showdown against the villain.  This showdown is the cinematic battle against the main villain of the plot, and it pulls together two or more showdown missions, creating a panoramic portrayal of your ultimate battle. Once the showdown begins, every hero on your team will be tested to their limits in this climactic struggle. The only way to claim victory and safeguard our world is to complete the showdown and defeat the villain. 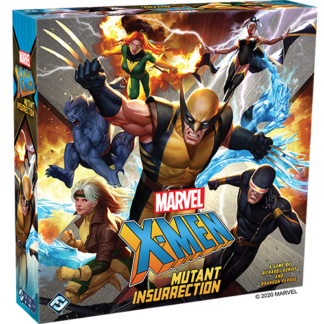