As the leader of the Empire, Emperor Palpatine’s personal safety is entrusted to his Royal Guards – a chosen cadre of trained warriors. Yet even among these deadly elite, there are some renowned for their skill and brutality. The Royal Guard Champion is one such fighter. 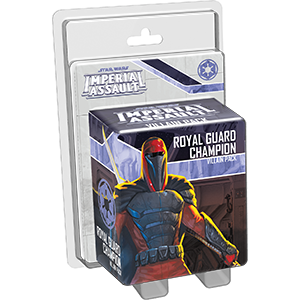 In your Imperial Assault missions, the Royal Guard Champion can cut a swath through hostile figures. His speed is great enough to quickly move across the battlefield, while his defense dice and high health ensure that his presence will not be quickly removed. The Royal Guard Champion’s surge abilities also support his aggressive approach, whether he pierces his opponents’ armor or leaves them bleeding in his wake. 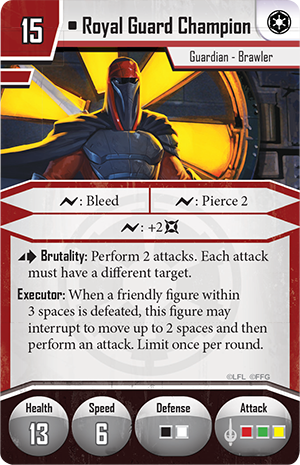 Your campaign missions can certainly benefit from the inclusion of the Royal Guard Champion. Many missions require you to wound all of the heroes to achieve victory and the Royal Guard Champion’s damage dealing potential is nearly unmatched among Imperial Assault figures. Of course, this Villain Pack also gives you access to the Crimson Empire agenda set. You may lure the Rebel heroes into a trap with the Infection side mission, increase the power of a Guardian group with Best of the Best , or steadily gather influence with Pulling the Strings . With these Agenda cards, you can put relentless pressure on the heroes both inside and outside campaign missions.

In skirmish missions, a primary source of victory points is killing your opponent’s figures. The Royal Guard Champion truly excels at this objective – his abilities allow him to perform more attacks than most other figures, maximizing the amount of damage he deals each round. And with the Command cards in this Villain Pack, you can keep opponents from fleeing and give the Royal Guard Champion even more attacks. 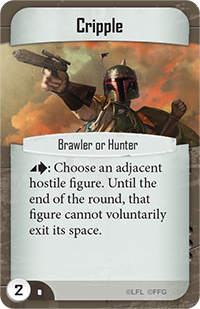 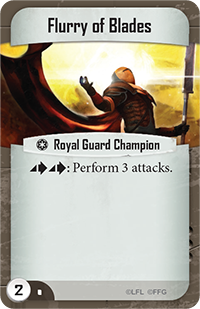 Parting Blow gives you the chance to interrupt and perform an attack when a hostile figure exits an adjacent space. After performing the attack, you become stunned, but you will undoubtedly punish a figure attempting to slip past you. Cunning enemies may attempt to engage the Royal Guard Champion at range, fleeing whenever he closes to attack. You can prevent this tactic with Cripple . This Command card allows you to keep an adjacent hostile figure from leaving its space until the end of the round, keeping it within range of the Royal Guard Champion’s attacks.Flurry of Blades offers a final way to give the Royal Guard Champion more attacks. By spending two actions with this card, you can perform three attacks. What’s more, you can make all three of these attacks against the same target, which should be more than enough to finish off any figure.