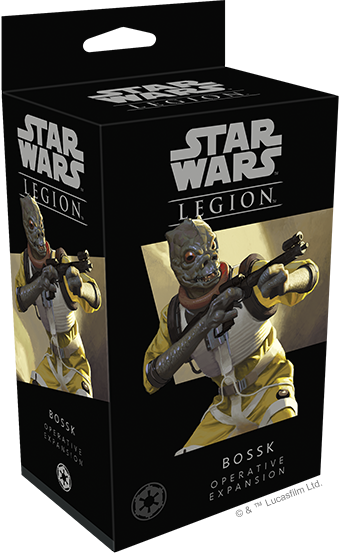 In a galaxy stricken by increasingly brazen “rebellion,” the Galactic Empire has come to rely on the talents of a cadre of infamous bounty hunters to supplement its forces and take down high profile Rebel leaders. Among the most widely feared of these hunters is the cold-blooded Bossk.

Remorseless and brutally efficient, this reptilian warrior has carved himself a reputation equaled only by the notorious Boba Fett. His success is at least partly a result of his unique Trandoshan physiology, which allows him to heal from otherwise deadly wounds at an astonishing rate. When Imperial military commanders have a target in mind, few can equal the raw ferocity and cunning of Bossk. Soon, you can harness the firepower and ferocity of a born hunter with the Bossk Operative Expansion for Star Wars™: Legion.

This expansion features an intricately detailed, unpainted Bossk miniature to expand your Star Wars: Legion collection. Unique among Imperial operatives, Bossk can join your army in two poses: you can depict him brandishing his fearsome Relby-v10 Mortar Rifle, or he can enter battle priming a deadly Dioxis Charge. In addition to the miniature, you’ll also find a unit card outlining all of Bossk’s abilities, as well as his three signature command cards that let you unlock his full potential. Finally, three upgrade cards round out this expansion, helping you modify Bossk with advanced training or specialized gear.

Join us as we take a look at everything inside the Bossk Operative Expansion! 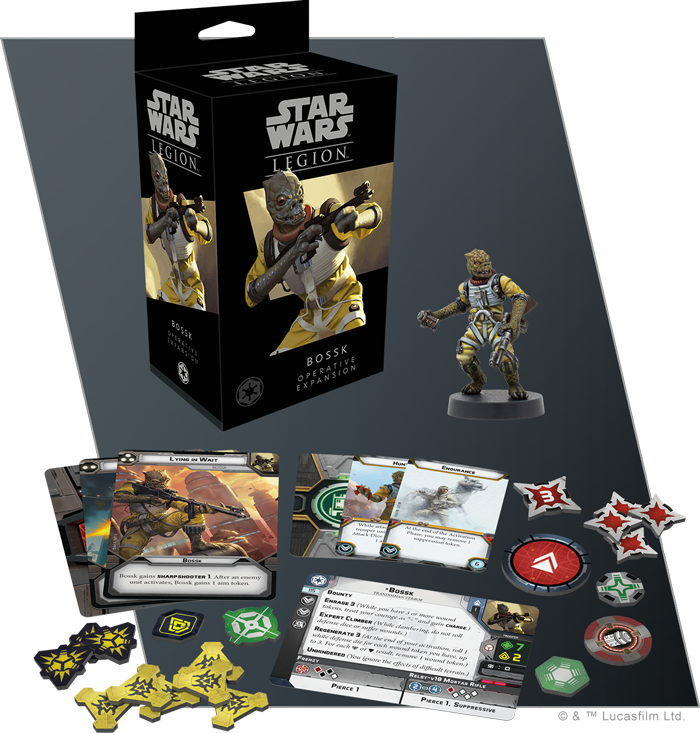 Bossk is a fearsome foe for any Rebel task force. A Trandoshan operating out of his modified YV-666 light freighter—the Hound’s Tooth—he has earned a reputation as one of the most effective bounty hunters in the galaxy by facing some of the galaxy’s strongest and coming out on top. When he comes into the employ of the Empire, Bossk thrives far behind enemy lines, pursuing his targets with a single-minded bloodlust.

Like Boba Fett, this Trandoshan is able to pursue bounties assigned to enemy commanders and operatives and—with his deadly combat skills—Bossk should have little trouble tracking down and defeating his target: securing a key victory for the Empire no matter what other objectives your army may pursue. Not only does his Relby-v10 mortar rifle make him a threat from a distance, it also has the suppressive power to slow down an enemy’s retreat long enough for Bossk to close in for a melee attack. When he does, his long claws give him a distinct advantage, letting him pierce through the enemy’s defenses no matter what kind of armor they’re wearing.

While his claws are clearly conducive to a career as a bounty hunter, Bossk actually features several other traits that make him a fearsome warrior. Even if an opponent gets the jump on him and lands a few blows, Bossk flies into a rage after taking too much damage, flinging himself into the fray with renewed purpose. Far from an uncontrollable rage, however, he can also enter a  Reptilian Rampage  that makes him even more ruthlessly efficient. Whether he’s using his claws or a blaster, the attacks that Bossk makes can be enhanced with the  Hunter  upgrade to make Bossk even more brutally effective against wounded targets. 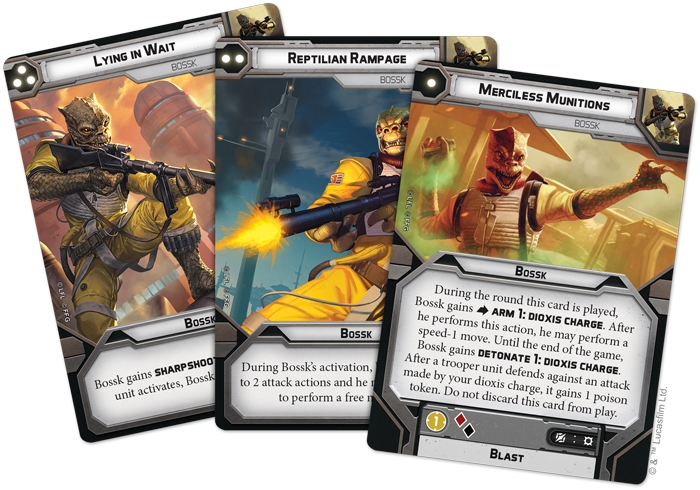 But attacks aren’t the only use Bossk has found for his claws. They also make him an Expert Climber who is Unhindered by the rough terrain that can slow down other species, ensuring few targets can escape his reach. On the other hand, such relentless pursuit could leave Bossk open to attack. If the tables begin to turn on him, he can always temporarily retreat and hope his natural regeneration will help him recover from his wounds. After activating, Bossk may roll up to three white defense dice and remove one wound for every non-blank result. With seven wounds and the ability to heal himself through regeneration, the Trandoshan is among the most resilient troopers in all of Star Wars: Legion. 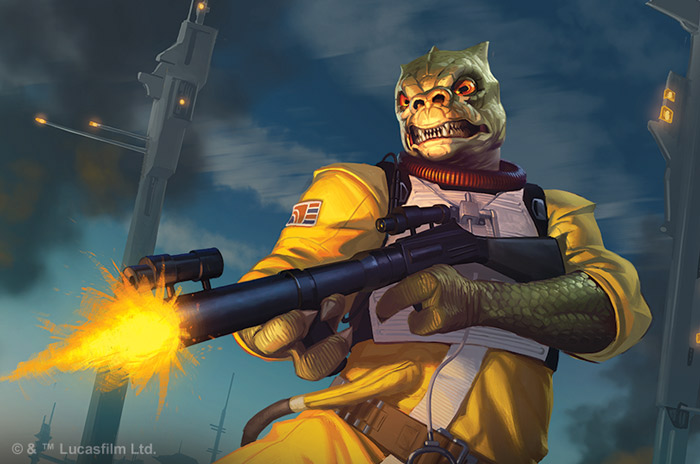 When not securing the extra victory point a bounty can entail, Bossk is just as effective at dismantling large groups of enemies. Beyond the Suppressive effects of his mortar rifle, you have several unique command cards to choose from. Bossk’s  Merciless Munitions,  for example, can plant a deadly Dioxis charge that can be detonated later at will. This deadly toxin bomb introduces an entirely new condition to Star Wars: Legion—poison. Troopers affected by poison tokens are dealt a single unblockable damage at the end of their activation before discarding the token! Coupled with the initial blast, a round of poison should be plenty to finish off any survivors.

Both Chewbacca and the Rebel Troopers have a poison token, so they each suffer one wound at the end of their activations!

When he isn’t in the thick of the action, Bossk can wait for the perfect moment to strike. For targets that use cover to escape his deadly claws and Dioxis charges, the bounty hunter can be Lying in Wait to even the odds. As a three pip card, Bossk is almost certain to activate after an enemy, gaining an ever-useful aim token as a result. Together with Sharpshooter and his Relby-v10, the Trandoshan can shred through even the most fortified enemy positions. 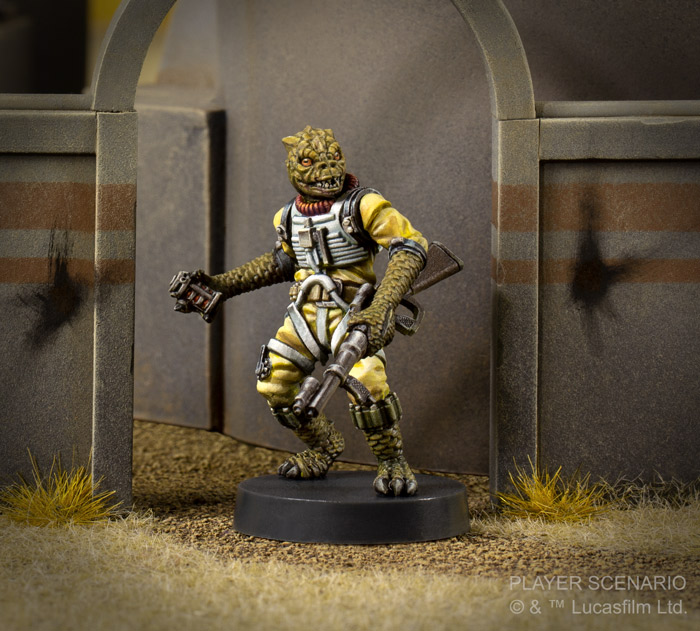 With his skills trained over decades in the criminal underworld, Bossk is a fearsome threat for any Rebel commander. Unrelenting and shrugging off deadly wounds, he can pursue bounties that other, less skilled hunters, might reject. When poison clouds and mortar shells begin to reshape the battlefield, any unfortunate bounty would be wise to make a hasty retreat. 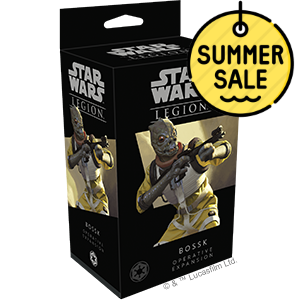