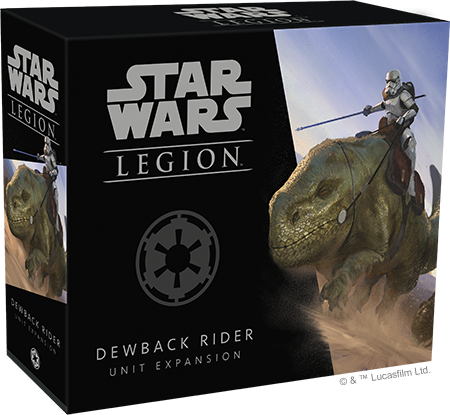 The Galactic Empire rules over countless worlds, each boasting its own unique flora, fauna, and terrain. Rather than adapt their military vehicles to the conditions of every individual world, Imperial commanders commonly prefer to use local creatures to support their operations. Now, one of the most iconic creatures from the Star Wars saga is on its way to bolster your Imperial forces.

Able to survive extreme temperatures, these mighty reptilian creatures are the perfect complement to Imperial troopers during their patrols. Within this expansion, you’ll find an unpainted, beautifully detailed Dewback miniature featuring a Sandtrooper rider with four distinct customization options: your Dewback Rider can be built carrying the standard shock prod, or you can equip them with three different weapons.

On top of the ability to customize the look of your Dewback Rider, this Unit Expansion gives you plenty of ways to tweak how this unit operates in the thick of battle. Six upgrade cards accompany the miniature, letting you modify its armament, training, or the comms systems it carries into battle. Finally, a unit card  and a handful of tokens round out this expansion, giving you everything you need to deploy it as a support unit for your Imperial armies. Read on for more information on the Dewback Rider Unit Expansion! 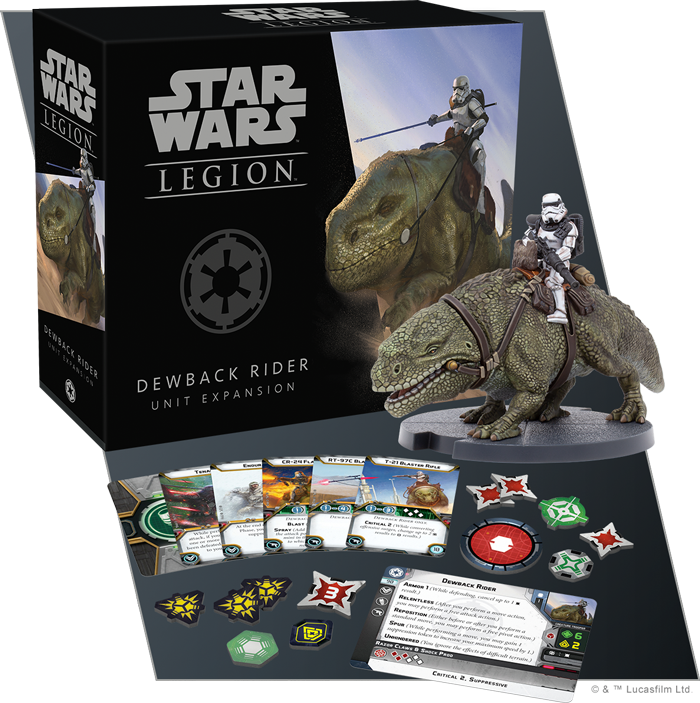 From towering AT-STs to legions of Stormtroopers, the Empire can display its dominance in any number of ways, and the hulking Dewback is yet another method of reminding local populations who is truly in control. Like their fellow Imperial military units, though, Dewback Riders are far from symbolic enforcers of Imperial rule. Between the Sandtrooper rider’s array of weaponry and the powerful claws of their mount, this duo is a force to be reckoned with.

As natives of the scorching hot desert planet Tatooine, Dewbacks have developed survival mechanisms that also make them useful weapons of war. Their thick hides, for instance, may protect Dewbacks from the brutal rays of Tatooine’s twin suns, but they also provide a useful layer of armor from incoming blaster fire, especially for a target as large as a Dewback. In addition to this scaly skin, a Dewback’s claws make them particularly surefooted beasts, ideal for conveying their riders across uncertain terrain on the battlefields of the Galactic Civil War. 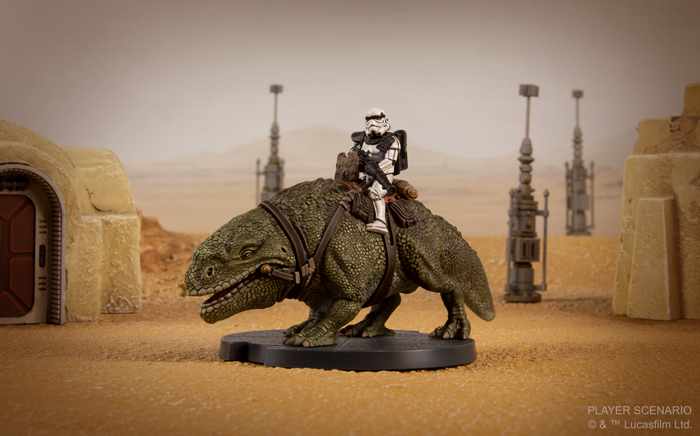 But these claws can be used beyond simply providing a sturdy foundation for a single trooper in battle. To the Empire, they are deadly weapons that can be used to thrash any unsuspecting enemies foolish enough to believe that Dewbacks are a docile species. Before a Dewback can unleash an attack with its claws, however, it must first close the distance. While Dewbacks commonly move at a plodding pace, they can be spurred forward to engage with enemy forces even faster.

As intimidating as they are, Dewbacks are only one half of the unit. Trained to work in tandem with the Sandtrooper riding atop them, Dewback and trooper can combine in a number of useful ways. If nothing else, the Sandtrooper carries a shock prod that makes the entire unit’s melee attack a bit stronger. But being astride a massive Dewback also provides a useful vantage point from which a trooper can make powerful ranged attacks—and they have three weapons that give them an option for every situation. Equipping your Sandtrooper with a T-21 blaster rifle or an RT-97C blaster rifle adds a new dimension to the unit, making them deadly from a distance. Alternatively, a CR-24 Flame Rifle enhances the Dewback Rider at close range, helping them uproot any subversive elements tucked behind cover.

No matter what weapons you choose, the Dewback Rider is sure to have an imposing presence on the battlefield. We’ll have much more information on the Dewback Rider and the upgrade cards included in this Unit Expansion in a future preview! 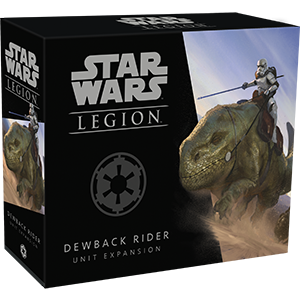