The Galactic Empire’s Death Star™ sets a deadly course toward Alderaan™ while Star Destroyers deploy probe droids throughout the Outer Rim. Meanwhile, a young woman risks her life to smuggle invaluable technical data to the Rebel Alliance, and a young farm boy dreams of adventure in the stars, little aware of the role he may someday play in deciding the course of the Galactic Civil War and the fates of countless lives…

The actions of a handful of men and women shape the course of the Galactic Civil War in Star Wars™: Rebellion, a board game of epic conflict between the Galactic Empire and Rebel Alliance for two to four players.

Yet for all its grandiosity, Star Wars™: Rebellion remains intensely personal, cinematic, and heroic. As much as your success depends upon the strength of your starships, vehicles, and troops, it depends upon the individual efforts of such notable characters as Luke Skywalker™, Leia Organa™, Grand Moff Tarkin™, and Emperor Palpatine™.

You need these leaders in order to attempt the secret missions that shape your war strategy, and the results of their missions blend together to weave a deep and immersive narrative. You might offer Boba Fett™ a bounty to capture Han Solo™, or you might task Wedge Antilles™ to lead the Rogue Squadron™ in an attack against an Imperial build yard.

A GAME OF GALACTIC SCOPE AND EPIC CONFLICT

Star Destroyers™ hover ominously in orbit above worlds with Rebel sympathies. Battalions of Stormtroopers march into battle ahead of AT-AT™ Walkers and AT-ST™ Walkers. Rebel strike teams perform surgical strikes against Imperial ship yards. Planets are swept up by the war, and countless numbers of their men and women dedicate themselves to either the Empire or the Rebel Alliance as their resources are used toward the development of new starships and vehicles.

The Galactic Civil War as it is found in Star Wars™: Rebellion is fought on multiple fronts. You battle for the loyalty of whole worlds and for their resources. You undertake missions across the galaxy. And, inevitably, Rebel and Imperial forces collide in massed battles for the control of key star systems.

The game is not all about your battles, but they are certainly a key component in any coherent strategy.

To win as the Imperial player, you need to find and destroy the Rebel base. To that end, you need to probe the galaxy’s star systems and move your forces through them. Any time you ever have loyalty or ground units in the same system as the Rebel base, the Rebel player must reveal it. Then, if your units just moved into the system, you engage the Rebels in combat. Wipe out the Rebel forces at the base, and you win.

To win as the Rebel player, you need to draw attention to your cause, earning a reputation for success, and inspiring the people of many worlds to join the fight for freedom. Simply surviving is a key component of your victory plan, but that will not be enough. You will also need to make a number of precise strikes, some of which will necessitate military action.

Mechanically, you have a number of objective cards, each of which is worth a set number of reputation points, and these points push you closer and closer toward tilting the Galactic Civil War in your favor. Interestingly, you do not necessarily need to win your engagements to score these points; many of them reward you just for eliminating specific Imperial forces or a certain number of Imperial forces.

Even when your battles do not immediately determine the fate of the Rebel base or result in more fame for the Rebel Alliance, they can dramatically impact your ability to increase your military and to move unimpeded throughout the galaxy.

Every other round, you gain resources from the worlds that are loyal to your cause. These resources can then be spent to recruit more troops and build more starships and vehicles. If you are the Imperial player, you also gain resources from the worlds that you have subjugated, potentially denying those resources to the Rebel player. And, here, battles can play an important role as the Empire subjugates planets by establishing a military presence on the ground. 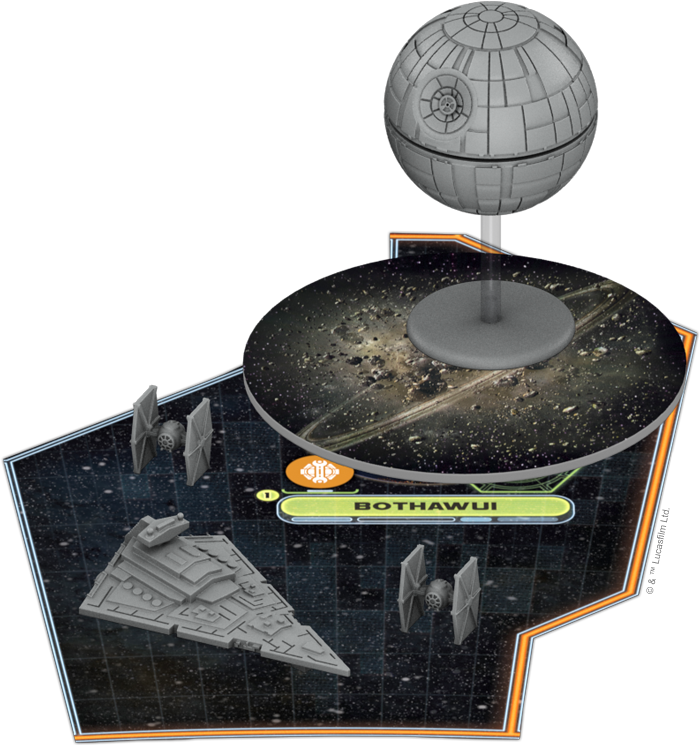 Perhaps, as the Imperial player, you don’t want to commit your forces to the subjugation of a planet. In this case, simply destroying it with your Death Star™ may be a good alternative.

Meanwhile, the galaxy in Star Wars™: Rebellion has an actual, physical shape that demands you give thought to your movement through the stars. Adjacent systems are separated by narrow borders, while thicker, orange borders hold together those systems clustered within one of the game’s eight regions. Still, the lack of serviceable hyperspace lanes prohibits direct travel between some systems that would appear to be adjacent, and the red areas between those systems indicate that no direct space travel is possible.

This means that you can anticipate your opponent’s movement through the galaxy and occasionally amass forces in choke points to contest his fleet. As the Rebel, you might give thought to the number of turns the Imperial player would need to spend moving in the right direction before Imperial forces would land at your base. As the Imperial, you need to think about how much you can afford to spread out and how long it would take to reinforce any given position should the Rebels strike.

A GAME OF PERSONAL HEROICS AND CINEMATIC DRAMA

Despite its galactic scope and ambitions, Star Wars™: Rebellion is a game, at its heart, that is driven by unique heroes (and villains) and their singular talents. No matter whether you play as the Empire or the Rebel Alliance, everything you do ties back to your leaders.

Both the Imperial and Rebel players begin the game with four leaders available to them:

These are not the sum of your possible leaders, however. You will also be able to recruit more leaders over the course of your game, including such notable characters as Luke Skywalker, Lando Calrissian™, General Veers™, and Soontir Fel™.

All these characters come with unique talents, derived from their assortment of skill icons and their tactics values, providing them with distinctive strengths and weaknesses, and making them better at some missions and worse at others. Likewise, some of your leaders are better in combat than others, and their combat utility may even depend upon whether your engagement is primarily a space battle or a ground battle. 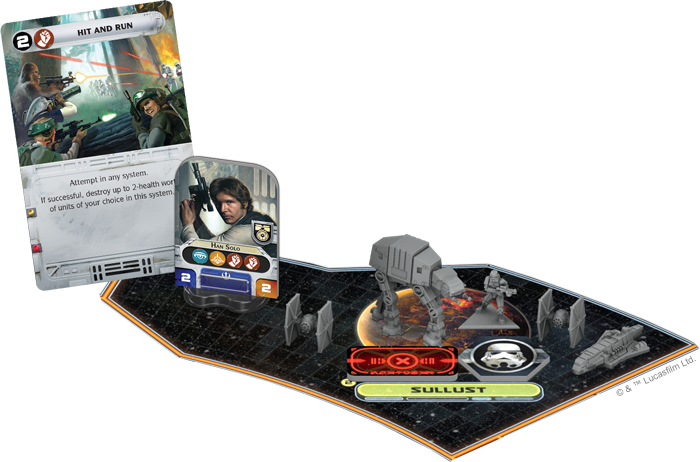 Even at those times when you have no hope of winning a straight-forward military engagement as the Rebel player, you may still be able to sabotage a planet’s resources, denying them to the Empire, and you can strike against their forces in other ways, as well. 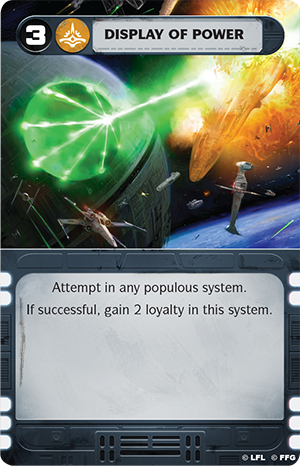 For example, the Imperial player might assert its influence over a star system with a Display of Power , but the Rebel player might respond by completing the Sabotage mission to ensure the Galactic Empire does not win the system’s valuable resources. 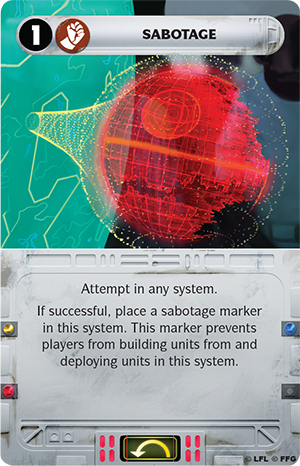 You will even find that many of your missions feature an image of a single leader. While you can attempt these missions with any of your leaders, if you attempt them with the matching leaders, you improve your chances of success should your opponent oppose your efforts. Some of these missions, like Seek Yoda and Probe Droid Initiative , even offer greater rewards for completing them with the matching leaders.

Finally, just as the heroes of the classic Star Wars™ trilogy were able to overcome tremendous odds – with skill, or luck, or through the use of the Force – your leaders in Star Wars™: Rebellion add an extra spark to your battles. 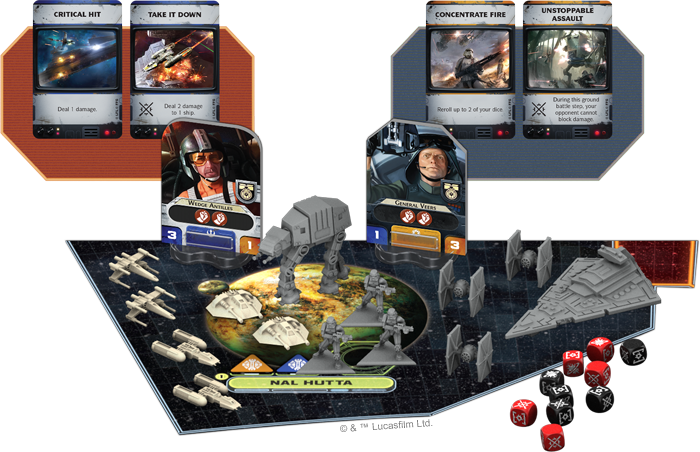 Ultimately, while Star Wars™: Rebellion is in many ways a game about galactic conquest, dominion, and logistics, it is also a game about the dramatic ways that a handful of individuals can affect the fates of countless lives.

IT IS A PERIOD OF CIVIL WAR…

In Star Wars: Rebellion, your games will span multiple star systems. Many fighters will be lost. Many troopers will fall. Planets will join the Alliance before they are overrun by the Empire and subjugated. Imperial officers may capture Rebel spies and interrogate them for valuable information. A hotshot Rebel pilot may land a one-in-a-million shot against the Death Star™ and destroy it.

Devise your strategy, and decide the final fate of the galaxy. Will you clamp it down under the rule of your tyrannical Empire? Or will your rag-tag Rebel Alliance and your handful of heroes lead the worlds to freedom?