The Lord of the Rings LCG: The Road Darkens Saga Expansion

“We will go, and may the others find a safe road! Strider will look after them. I don’t suppose we shall see them again.”
–Frodo, The Fellowship of the Ring 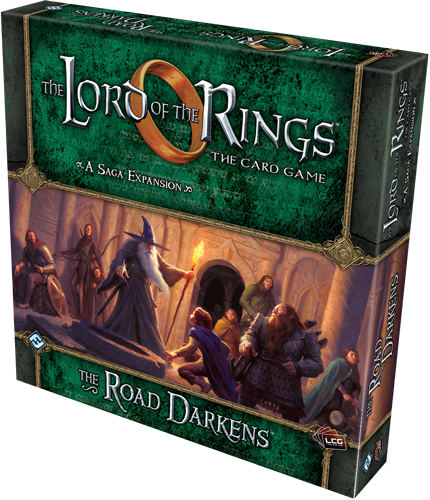 The Road Darkens contains 165 cards that introduce three new scenarios to the game, along with two heroes, twenty-seven player cards (three copies each of nine different player cards), eight boons, and seven burdens. Together, these cards allow you to immerse yourself in some of the most pivotal moments of Middle-earth’s Third Age.

From the Council of Elrond through the breaking of the Fellowship, The Road Darkens allows you to join Frodo Baggins and his companions on their all-important quest. Along the way, you’ll experience an epic series of memorable encounters drawn directly from the second half of The Fellowship of the Ring ! 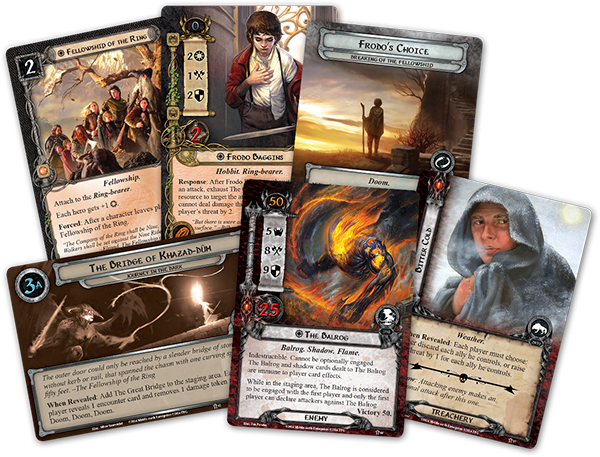 “I think we ought to move again this evening. Hollin is no longer wholesome for us: it is being watched.”
–Aragorn, The Fellowship of the Ring

The three scenarios of The Road Darkens bring you as close to Frodo Baggins and his fantastic struggles as you can get without finding mountain snow on your jacket or finding yourself standing face-to-face with a Balrog.

In The Ring Goes South , you must help Frodo and his companions find passage through the hills of Hollin and the snows that follow them into the Misty Mountains. Along the way, you’ll be harassed by wargs and regiments of dark crows. You’ll have to find the Doors of Durin, and you’ll have to survive a combat with the deadly Watcher in the Water.

Then, in Journey in the Dark , you must find your way as quickly as possible through the Mines of Moria, but your way won’t be easy! There are many roads to choose from, hordes of Orcs lurk in the depths and the darkness, and there are far older and fouler things that you must also face.

Finally, Breaking of the Fellowship relates a select sequence of events from the final chapters of The Fellowship of the Ring . When Frodo disappears, the rest of your fellowship must track him down. Their desperate efforts may lead them in different directions, and some may not return.

“I do not foretell, for all foretelling is now in vain: on the one hand lies darkness, and on the other only hope.”
–Galadriel, The Fellowship of the Ring

On their own, the scenarios from The Road Darkens all present rewarding play experiences, but you can also enjoy them as individual chapters of a fantasy saga with a much greater scope. When you play in Campaign Mode, using the rules from The Black Riders , along with that expansion’s boons and burdens, the Ring weighs heavy upon you, your every decision carries greater import, and your every action has meaningful consequences…

The Road Darkens continues the Saga begun in The Black Riders , and as it does, it adds new boons and burdens to serve as tangible reminders of the choices you make. 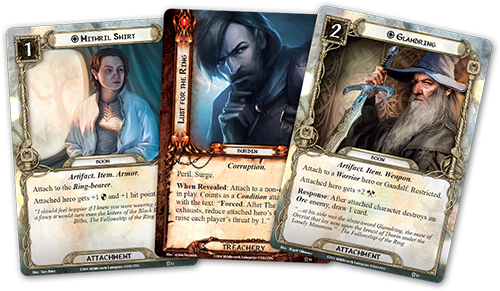 Whenever you receive a boon or burden during your play in Campaign Mode, that card travels with your heroes from scenario to scenario, meaning that you can enjoy the powerful benefits of an Artifact like Glamdring ( The Road Darkens , 13) in adventure after adventure, or you may find yourself susceptible to the detrimental Corruption effects of Lust for the Ring ( The Road Darkens , 84) throughout the remainder of your journeys.

Because the choices you make in the course of your adventures determine how these cards are assigned, you’ll have to think carefully at every turn. Will you proceed slowly and cautiously? Or will you take shortcuts, hoping that you won’t suffer for them later?

The Fellowship of the Ring

“I will send out messages, such as I can contrive, to those whom I know in the wide world.”
–Elrond, The Fellowship of the Ring 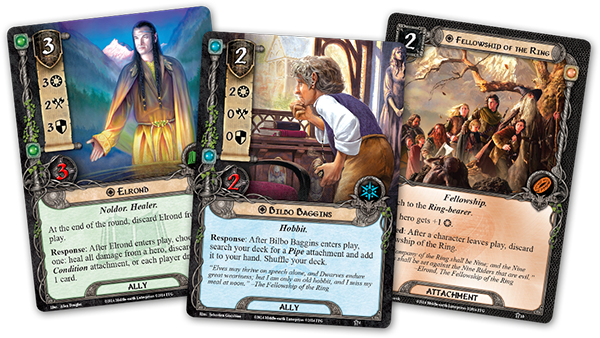 Even as they develop other themes existing within The Lord of the Rings: The Card Game , these allies offer players the means to incorporate powerful new characters into their decks without suffering the penalties associated with trading their heroes in Campaign Mode.

Of course, you’ll need all the strength that Elrond, Bilbo, and the expansion’s other allies and player cards can lend you. The road is dangerous, and it grows only darker and darker as you join Frodo along his journeys into the shadow of Mordor! 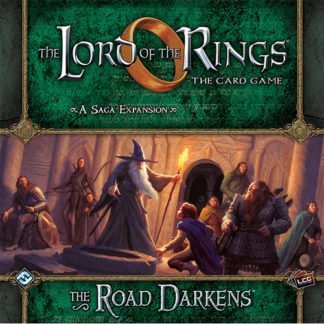