The Lord of the Rings: The Card Game – The Black Serpent 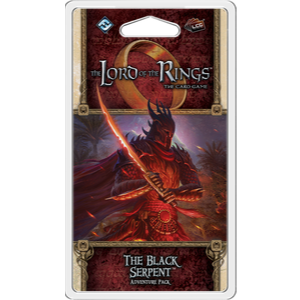 The Black Serpent is the fourth Adventure Pack in the Haradrim cycle for The Lord of the Rings: The Card Game. Its sixty cards (which include a new hero and three copies of each new player card) lead several of Middle-earth’s greatest heroes along a detour from their homeward path. Even in the arid wastes of Harad’s deserts, even after traveling league upon grueling league, and even after just barely surviving their encounters with Orcs, Wargs, and giant spiders—the heroes remain true to themselves and committed to their fight against the Dark Lord. 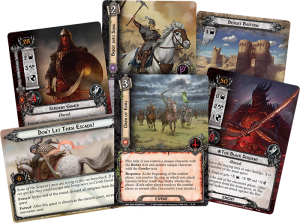 Accordingly, when your heroes come across an opportunity to strike against a caravan of Haradrim carrying tributes to the Dark Lord of Mordor, they hesitate only long enough to devise a plan. When the caravan camps inside the walls of a dilapidated desert fortress, the heroes and their allies will launch their ambush. But will their tactics prove sound enough to account for the caravan’s greater numbers? You’ll join these heroes and fight alongside them in the new scenario from The Black Serpent.

Je bekijkt nu: The Lord of the Rings: The Card Game – The Black Serpent €10,00
Bestel Nu