You’ve already explored the secret, underground laboratory of a scientist, thwarted a supervillain’s dastardly plot, and worked to reunite your team after crash landing on the island of an eccentric billionaire. Now, three new adventures will soon arrive to test your skills:

At the beginning of The House on the Hill, strange, paranormal activities have surrounded an abandoned house for the past three days. When an investigation uncovers that these occult occurrences center on an excerpt read from The Book of the Dead, you and your companions are tasked to enter the house, find the book, and stop the curse…

Whereas The House on the Hill surrounds you with the atmosphere of a horror story, The Nautilus’ Traps brings you to the bottom of the sea. When a sea monster attacks your submarine at the outset of the adventure, it’s up to you to make your way through the depths and back to the surface if you’re going to escape… before your oxygen runs out.

The third adventure, The Tonipal’s Treasure, sets you at the start of a hunt for the treasure of Captain Smith, hidden somewhere on Tonipal Island. As your adventure begins, you’ve been arrested by the Governor and thrown into prison—you’ll need to escape quickly, especially since Johnson, a famous treasure hunter, is also on his way to Tonipal in search of the very treasure that you seek. 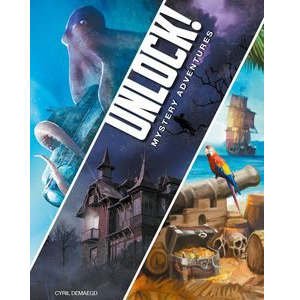