There are twists of time and space, of vision and reality, which only a dreamer can divine…
–H. P. Lovecraft, “The Silver Key” 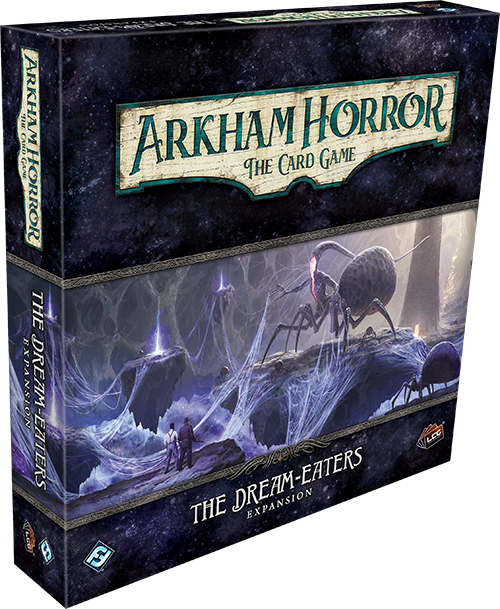 There is a hidden realm beyond the world of the waking, a realm of wonder, imagination, and nightmares. After occult author Virgil Gray writes about his adventures in a place he refers to as the “Dreamlands,” you decide to learn the truth for yourself. But the deeper you fall into your investigation, the more you find yourself questioning: what is real and what is fiction? And what secrets await in the dark, forbidden places beyond the gates of sleep?

Fantasy Flight Games is proud to announce the upcoming release of The Dream-Eaters, a new deluxe expansion for Arkham Horror: The Card Game—now available for pre-order at your local retailer or online through our website!

In this deluxe expansion, which kicks off the fifth cycle of Arkham Horror: The Card Game, 1–4 players take on the roles of either a group of investigators venturing into the Dreamlands or their companions who have been left in the waking world. Complete with 95 scenario cards to challenge your investigators and 56 player cards to strengthen them, this expansion contains the first two scenarios of The Dream-Eaters cycle; one scenario for each of these two groups. What wonders and horrors will you find lurking just beyond the reach of your waking mind? 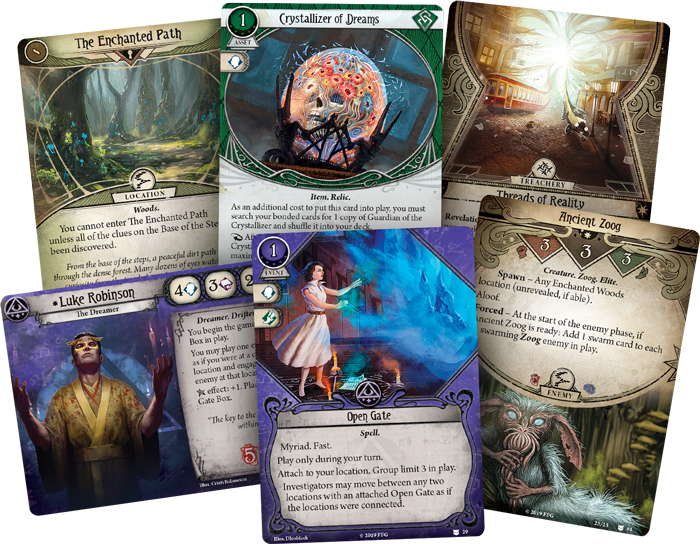 As a special bonus when you pre-order The Dream-Eaters from the Fantasy Flight Games website, you will also receive a collection of eight carefully selected 5” x 7” art prints that highlight favorite pieces from this new expansion. Featuring key locations and characters of the Arkham Horror: The Card Game, these pieces immerse you in the wondrous world of the Dreamlands and bring you face-to-face with beings you’ve only seen in your best dreams and worst nightmares. Preorders within the continental United States will also receive free shipping! 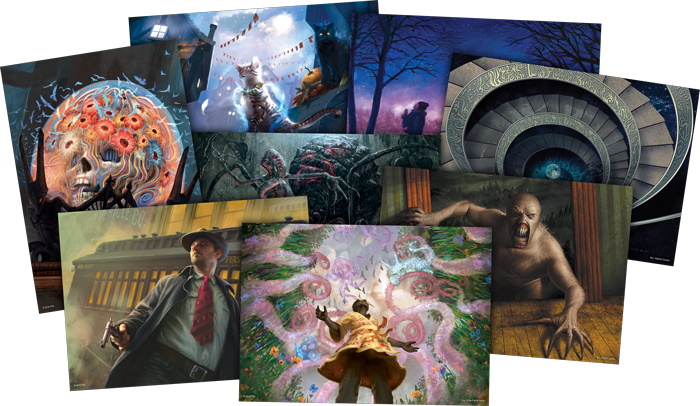 One Reality of Many

Something strange is happening in Arkham.

The dreary New England town has always been known for its odd occurrences, but this goes beyond anything the unshakeable citizens have seen before. Author Virgil Gray has released the latest issue of “Tales from Nevermore,” where he describes a journey he has taken in his dreams—a journey he claims is not a work of fiction. He writes of an impossibly long winding staircase, a pillar of living fire, a tree that came from the moon, and a talking cat, among other impossible things. Yet somehow, these experiences seem to be shared by other residents of Arkham who claim to have experienced the exact same dream. Experts convinced Gray and others to undergo therapy at the local asylum for this shared hysteria, but something tells you there is more to this tale than meets the eye. 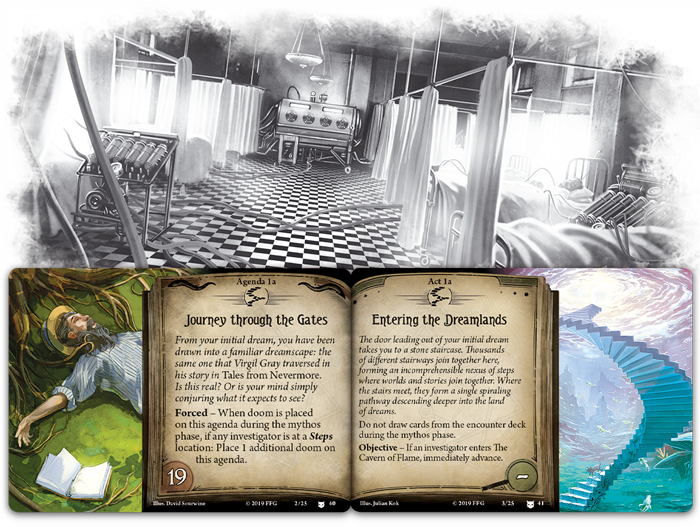 In order to get the bottom of this strange phenomenon, your team of investigators will have to split up, and as you divide you will soon find that yours is but one of myriad realities—there are countless paths to follow. The Dream-Eaters cycle includes two campaigns for Arkham Horror: The Card Game, each with their own campaign log. The deluxe expansion where you begin your adventures includes one scenario for each of these campaigns. In the first of these, “Beyond the Gates of Sleep,” you descend into the realm of the dreamers in search of answers. From your initial dream, you are drawn into a familiar dreamscape: the same one that Virgil Gray traversed in his story in “Tales from Nevermore.” Even as you witness the truth of Gray’s stories, you must ask yourself, is this real? Or is your mind simply conjuring what it expects to see?

Each of the scenarios in The Dream-Eaters can be played on their own or combined with three of the six Mythos Packs in The Dream-Eaters cycle to form a larger four-part campaign. Alternatively, these scenarios can also be combined with all six of Mythos Packs to form a cohesive eight-part campaign. Whichever path you follow, you must learn whether you can trust your mind and your allies and hold onto what you know to be true if you wish to survive. Your fate is in your hands. 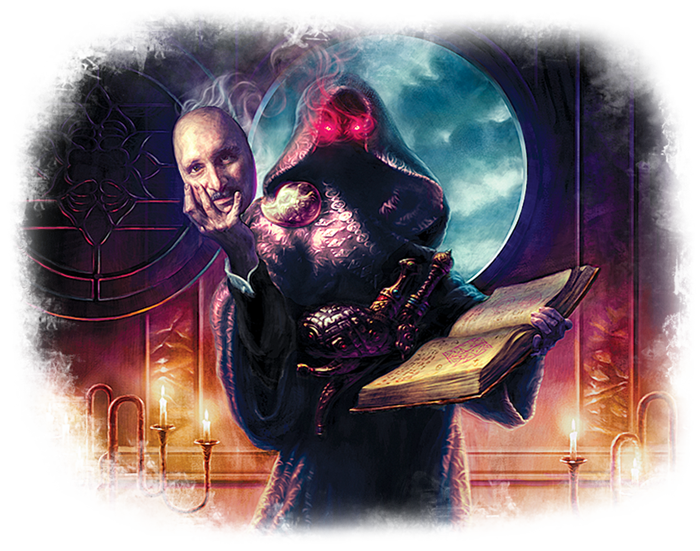 As you prepare to journey into the dangerous realm that lurks beyond the waking world, you will need to rely on a new team of allies, and none are better prepared to guide you through the Dreamlands than the dreamer himself,Luke Robinson (The Dream-Eaters, 4). It was many years ago when Luke first discovered the entrance to the Dreamlands. Through the gift of an unusual box his uncle had left him, he learned of a way to travel to and from the Gates of Sleep. He has since spent the majority of his days wandering the land of dreams in search of adventure. From the streets of Celephaïs to the Enchanted Wood with its endless mysteries he wanders, unraveling the secrets of the land and of the myriad dreamers who reside there. Now, an ancient chaos threatens to annihilate not only the waking world but the world of his dreams as well. This is something Luke cannot allow.

The strange artifact that Luke’s uncle had gifted him so long ago was actually the powerful Gate Box (The Dream Eaters, 13) that is now Luke’s signature asset. He carries the box with him everywhere, beginning each game with it in play, and as a fast action, he may spend a charge from this Relic to disengage from each enemy and escape to the Dream-Gate (The Dream-Eaters, 15a). This location is only open to Luke, and it may act as a safe haven where he may heal or prepare for the trials ahead without the fear of being attacked by monsters. But this does not mean that the dreamer is removed from the fight entirely. The Dream-Gate is connected to all revealed locations, increasing Luke’s ability to play an event card each turn as if it were at a connecting location. He may also use it as a device to aide with movement across a vast area, as if Luke is still at the Dream-Gate at the end of the investigation phase, he moves to any revealed location.

The Dream-Gate features the bonded keyword, first introduced in Before the Black Throne, which means that it can only enter play through use of the player card bonded to it, in this case the Gate Box. Bonded cards have no level and therefore are not part of your investigator deck. Rather, they are set aside out of play until summoned, leaving you more possibilities for fortifying your investigator for the challenges ahead. But along with the powers the Dream-Gate presents, there are also great dangers. 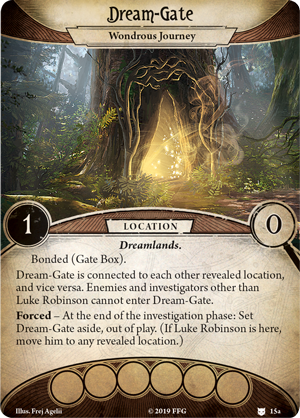 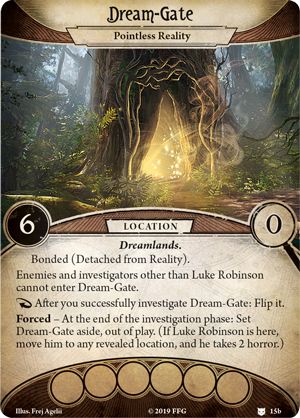 As Luke journeys through the Dreamlands, he must take care that he does not become Detached from Reality (The Dream Eaters, 14). If this Madness is revealed, the Pointless Reality version of Dream Gate (The Dream-Eaters, 15b) is brought into play and Luke Robison becomes trapped there until either he can successfully investigate the six-shroud location or the investigation phase ends. It is vital that Luke complete this task, and without the help of his fellow investigators who cannot enter the location, lest he be forced from the Dream-Gate to any revealed location, suffering two horror in the process. While Luke does have nine sanity, an admirable score even among the Mystics of Arkham, a misstep in the Dreamlands can have catastrophic consequences on the waking world; and Luke must never forget what is real, and what is only a dream. 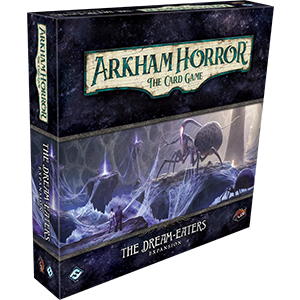