Welcome, one and all! 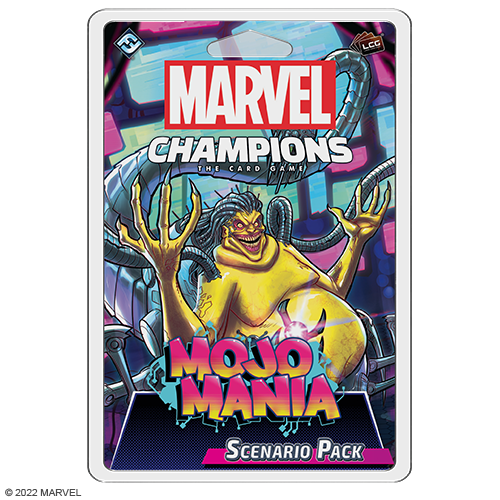 Join us in the marvelous and magnificent Mojoverse, a terrifically televised realm of nonstop entertainment and jaw-dropping drama. We have a really special show for you tonight, folks: a bunch of upstart heroes think they can triumph over the trials before them, but will they actually manage to make a scene? Or will they drop off the charts like a bunch of has-beens? Stay tuned to find out!

This 78-card scenario pack introduces three brand-new scenarios to the game, each featuring a different member of the Mojoverse. These scenarios can be played standalone or sequentially as the game’s very first three-part mini-campaign. Also included are six new modular encounter sets that can be added to any Marvel Champions scenario, expanding the game’s customization options to starry new heights. Do you have what it takes to survive the most dangerous reality TV ever? 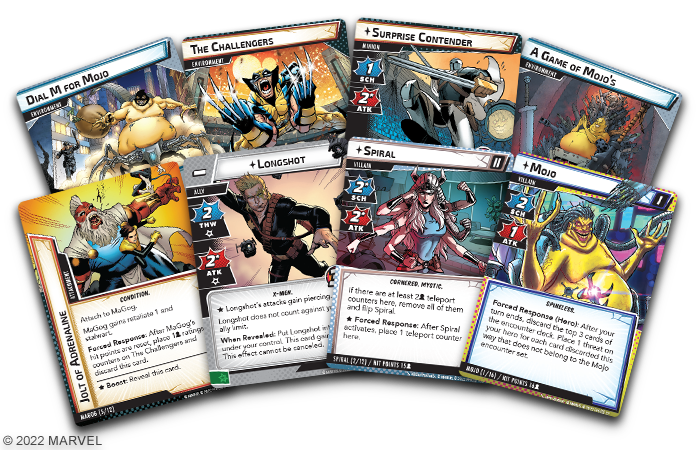 A Battle for Ratings

The first episode of this mini-campaign pits the players against the mighty MaGog (MojoMania, 1A), the ninety-nine time defending Mojoverse champion. 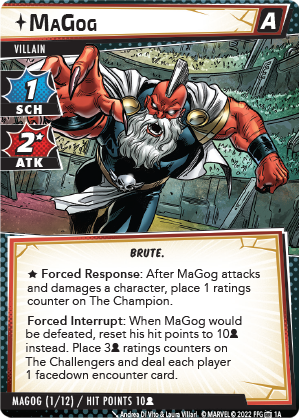 This scenario may seem like a classic, no-holds-barred brawl, but you’ll soon realize that this is no ordinary fight. MaGog will keep getting back up over and over again; he is the reigning Champion (MojoMania, 3A), after all. You and your fellow heroes are the Challengers (MojoMania, 4A) here, and in order to win this Melee in the Mojo-seum (MojoMania, 2B), you must win the crowd’s favor. Earn yourselves (MojoMania, 4B) 10 ratings counters per player before MaGog does (MojoMania, 3B), and you will walk away victorious! 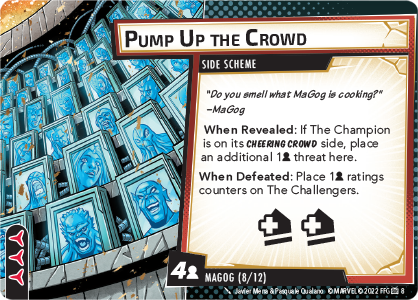 Not that it will be easy. MaGog will fight tooth and nail to Defend the Title (MojoMania, 10), utilizing Jolts of Adrenaline (MojoMania, 5) and Pumping Up the Crowd (MojoMania, 8) to keep the heroes on their toes and ensure the audience stays on his side. And if things get dicey, he might get help from a Surprise Contender (MojoMania, 7), so you will always have to stay on your toes! 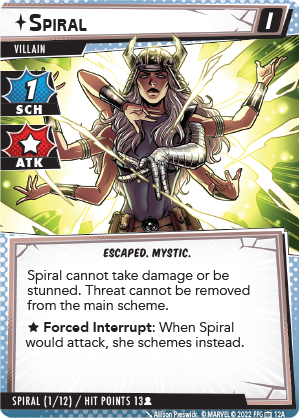 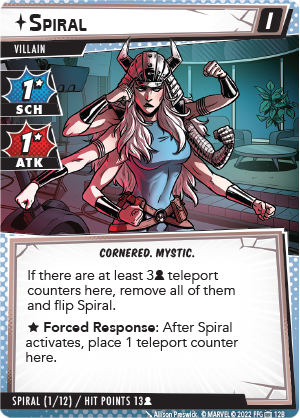 Once you escape the Mojo-seum, you will have to contend with Spiral (MojoMania, 12A). This mystical teleporter could help you escape Mojo’s clutches, but you’ll need to catch her first. While Spiral is on her Escaped side, you’ll have to chase her Across the Mojoverse (MojoMania, 15B). The Search for Spiral (MojoMania, 16) will take you across several of Mojo’s sinister shows, but you must persist, because only once you’ve Cornered (MojoMania, 17) her can you actually engage her in combat.

The Many Shows of Mojo 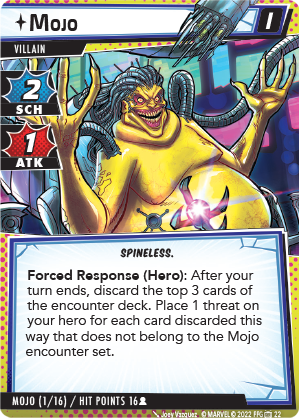 Once you’ve caught Spiral and convinced her to aid you, it’s time to face Mojo (MojoMania, 22) and kick off the main event: MojoMania (Mojomania, 25B)! Spin the Wheel of Genres (MojoMania, 26A) and see if you can defeat the Spineless One before the show writers run out of ideas. Once the wheel stops (MojoMania, 26B), another show is added to the playlist, but if there aren’t any shows left, your party will wind up canceled! 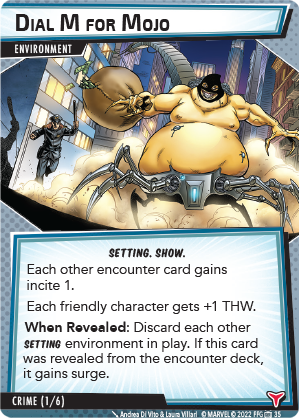 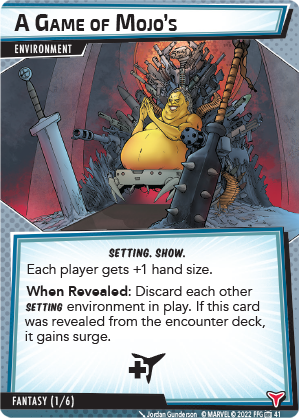 Both Spiral and Mojo’s scenarios utilize the “show” modular encounter sets included in this scenario pack. In these six encounter sets, you’ll find yourself thrown across several genres of television, from crazy crime drama to high fantasy to hair-raising horror to silly sitcom. Each show has a different theme to its mechanics; for example, the “crime” show focuses on side schemes, with schemes like Crime Scene Investigation (MojoMania, 37) and Law & Order (MojoMania, 38) massively hindering the heroes’ efforts. Meanwhile, the “fantasy” show has mechanics that represent quests, whether it’s a Fetch Quest (MojoMania, 45) to find something useful in your deck or a quest to defeat a monster, such as a Troll (MojoMania, 44) or a terrifying Dragon (MojoMania, 42). 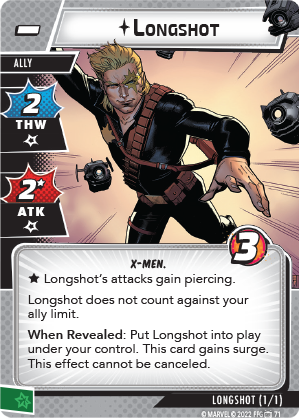 In addition to the six modular encounter sets representing Mojo’s television shows, MojoMania also includes a special single-card encounter set, Longshot (MojoMania, 71)! Just like normal modular encounter sets, Longshot can be included in any scenario (though he does not count toward the number of sets that make up that scenario). However, Longshot is an encounter card that actually helps the heroes—he enters play as an ally under a player’s control, and he will continue to swoop in periodically throughout the game. This can slightly lower the difficulty of the game, so if you find yourself struggling with a particular scenario, give Longshot a call! 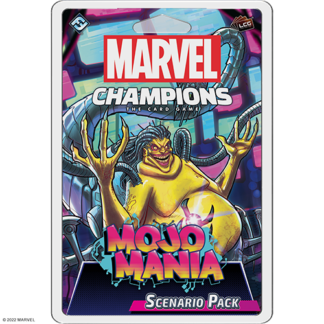