Mysterium is a cooperative, deduction game that challenges two to seven players to solve a murder that occurred thirty years ago. One player takes on the role of a restless ghost, tasked with communicating the true culprit of the murder to the assembled psychics. The other players all play as psychics.

They all receive visions and must interprete them to the best of their abilities. By doing so they can  narrow down the list of suspects. Yet time is in no one’s favor tonight. If the players take too long to discover the truth, the bridge between the worlds is closed; and the ghost must wait another year to reach its eternal rest!

Before a game of Mysterium begins, a set number of potential culprits, murder locations, and deadly objects are randomly drawn and displayed in front of the psychics. One set of these cards corresponds to real events, but the ghost is in severe shock from his untimely demise, and he has only vague memories of his own death.

Time is running out, and the psychics must follow their intuitions. Together they must narrow down their list of suspects. After the cards are displayed in front of the psychics, the ghost player assigns each psychic a single character, location, and object behind his or her screen. The ghost must help the psychics narrow the list of suspects.

He can lead them to correctly interpret a series of visions.

Of course, when playing Mysterium there are countless difficulties in communicating with the afterlife. Most notably that such interactions are often vague and imprecise. During each round of Mysterium, the ghost must lead each psychic towards the correct answer by granting him or her one or more vision card(s).

For instance, as the ghost, you may want a certain player to choose the Governess character. The Governess card features a ball of red wool; so you browse your hand of vision cards and select a card with a ball and a strand of red wool. You combine this card with two more cards—one which shows cords and ropes and another that shows a woman with a hat—to enhance the vision.

If all of the psychics are clever enough to correctly interpret their visions and identify their matched characters, locations, and objects before time runs out, one final test still awaits them as they gather their findings to determine the true culprit in the second phase of the game.

First, each psychic lines up his or her combination of cards to help the ghost recall the identity of the culprit. Then, the psychics experience a shared vision as the ghost attempts to lead them towards the true murderer. The ghost must choose three vision cards that all point towards the same set. One vision will correspond to the culprit. Another one to the location of the killing, and one to the murder weapon.

Once the ghost has selected the cards of the shared vision; the psychics can look at them based on their level of clairvoyance. Psychics with a low level on the clairvoyancy track will only see one vision card before they must vote on who the true murderer is. Intermediate level psychics will see two vision cards before they vote. The most accomplished psychics will be able to see all three cards of the shared vision before they cast their vote.

When this happens, the ghost must wander alone for another year. All the players will then lose the game! 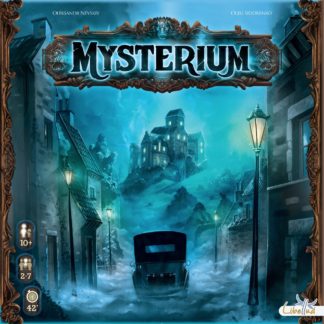